Not to be confused with Torradan ap Dugal.

Provincial Governor Fortunata ap Dugal, also known as the Pirate Queen and Captain ap Dugal, is the Imperial leader of a pirate crew known as the Red Sails and the current ruler of Anvil.

She is also the sister of Codus ap Dugal, the gamemaster of the Kvatch Arena, although the latter prefers to deny that fact in order to keep face and his clean reputation.

Fortunata is initially encountered at Jarol Estate, as her conversation with Carolus Aquilarios and Lord Quintus Jarol can be overheard:

After nearing the meeting area of the leaders, Commander Pelletus will inform them that you have infiltrated the estate.

Commander Pelletus: "Lord Quintus! Intruders have penetrated the estate. We need to move the three of you immediately!"
Quintus Jarol: "Do not be alarmed, my friends. We've prepared for any contingency. Commander, secure the halls. Make sure no one follows us!"
Pelletus: "Of course, my lord. We'll find the intruders."

Fortunata will later escape out of the estate with Carolus.

Fortunata is later met at Anvil Castle, as she has contacted the Dark Brotherhood for a contract. She tasks you with assassinating Commander Marcus Scipio, and to inform Count Carolus of your accomplishment. In a twist of events, Carolus is unexpectedly performing the Black Sacrament. He mistakes you for the assassin sent to answer his deal, and tells you to assassinate Fortunata. Speaker Terenus enters the room, being the actual assassin who is answering to Carolus, and sends you to kill Fortunata while he negotiates with Carolus.

Back at Anvil Castle, fellow assassin Mirabelle Motierre is in character for her disguise as one of Fortunata's hand-maidens. She recommends poisoning Fortunata's favorite wine decanter, as the governor is known to make a toast for celebratory occasions. After going to Fortunata's suite, she says "How in Oblivion's bleakness did you get in here? No, don't tell me. I don't really want to know your trade secrets." Once you have told her of Scipio's death, she says "Fetch my wine, girl. You know the one. And bring something … less expensive for my friend here." She then goes to the balcony, where she requests to meet you. At the balcony, Mirabelle Motierre appears and has the follow exchange with Fortunata:

Once Fortunata falls off the cliff, her body will lay lifeless on the rocks surrounding the castle. 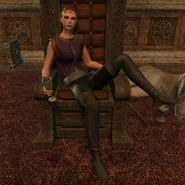 Fortunata on her throne.

Fortunata's corpse on the rocks surrounding Anvil Castle.
Add a photo to this gallery

Retrieved from "https://elderscrolls.fandom.com/wiki/Governor_Fortunata_ap_Dugal?oldid=3045030"
*Disclosure: Some of the links above are affiliate links, meaning, at no additional cost to you, Fandom will earn a commission if you click through and make a purchase. Community content is available under CC-BY-SA unless otherwise noted.