Grahtwood, also known as the Kingdom of Grahtwood,[1] is a zone in the southeast of Valenwood. Its capital, the massive tree-city of Elden Root, with King Camoran Aeradan on the throne, serves as the capital of the Aldmeri Dominion, hidden away in the impenetrable jungle full of huge graht-oak trees.

"This region is the southern heart of the Wood Elves' great forest, and home to more of the gigantic graht-oaks than any other part of Valenwood. Its capital, now also the capital of the entire Aldmeri Dominion, is Elden Root."
―Loading screen[src]

The capital of Grahtwood, Elden Root, has served as the capital city of the Aldmeri Dominion since its founding and was simultaneously made the provincial capital of Valenwood by the Thalmor.[2] During the Planemeld in 2E 582, parts of Grahtwood suffered attacks from the Daedra which included the total destruction of Gil-Var-Delle.[3][4][5]

The region, predominantly populated by native Bosmer populations, also features various Orsimer strongholds, locally referred to as Wood Orcs and considered distinct from typical Orsimer,[6] who frequently fend off attacks by organised bandits[7] as well as Ayleid ruins long since abandoned by their creators.[3] Separate from the native Bosmer and Orsimer are populations of Imperials in and around the city of Southpoint that was founded by the Second Empire.[1] During the Alliance War, a group of Argonians left Black Marsh by sea and made landfall in Grahtwood, creating the Gray Mire.[8] Despite the people of the Gray Mire initially considering attacking local Dominion forces, the Dominion tolerated their presence.[9] Khajiit traders also have a presence in the north of the region at Redfur Trading Post, established by Khajiit from Senchal in Southern Elsweyr.[10]

The following are locations accessible in Grahtwood and, with the exception of unmarked locations, are discoverable on the map. Points of Interest serve as locations with unique side quests, while cities serve as the centralised areas with multiple sublocations and act as a hub for services and merchants. Explanations of the types of locations are provided in the main locations page.

Sixteen Skyshards can be found in Grahtwood totalling in five skill points with one left over. The zone guide provides clues as to the location of each Skyshard, but many can be found simply by exploring and watching for the distinctive pillar of light they emit.

Thirty-two books that are a part of Shalidor's Library can be found in Grahtwood and added to the collection. Books that have already been found in other zones will already be marked as completed in the zone tracker.

Elden Root from a distance.

A Bosmer temple in Grahtwood. 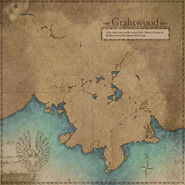 A map of Grahtwood.
Add a photo to this gallery

Retrieved from "https://elderscrolls.fandom.com/wiki/Grahtwood?oldid=3159333"
*Disclosure: Some of the links above are affiliate links, meaning, at no additional cost to you, Fandom will earn a commission if you click through and make a purchase. Community content is available under CC-BY-SA unless otherwise noted.