"The regular rain and dark soils of the Grazelands produce the rich grazing for Ashlander herds that give the region its name. The region lies in the northeast of Vvardenfell, sandwiched between the Ashlands and Azura's Coast."
―Anonymous[src]

The Grazelands refer to fertile grassland located in Morrowind, another example of Grazelands would be the vast Deshaan Plains found in Southern Morrowind, with cities such as Mournhold and Narsis. When talking about the Grazelands in Vvardenfell, it refers to the region in the northeast just before Azura's Coast and the Vvardenfell Ashlands. One of the more significant settlements in the Grazelands would be the town of Vos, a farming village created by the Velothi People of the Merethic Era. The town of Tel Vos is a House Telvanni tower that governs the town of Vos from the west. The only other settlements in the Grazelands are various Ashlander camps, more specifically the Ahemmusa Camp and the Zainab Camp. These camps house one of the four top Ashlander tribes of Vvardenfell.

During the Interregnum in 2E 583, the town of Vos was under the control of Tel Mora. A Telvanni tower in the nearby Azura's Coast controlled by Mistress Dratha of House Telvanni. However, she had fallen ill, and a man named Savarak Fels took control of Vos, under a semi-dictatorial rule. Dratha's mouth, Llayne Sadri thought it was suspicious that Savarek received sudden wealth after Dratha's incident. Sadri tasked an Outlander called the Vestige to investigate the situation and find out about Savarak's scheme. The Vestige uncovered that Savarak was ordered by House Hlaalu to poison Dratha, to give Hlaalu a holding in Vos. The Vestige defeated Savarak Fels on Selvil Island and the Black Snails Mercenary group.[2]

Around the same time, Lord Vivec was falling ill and his powers were draining. An Ashlander from Ald'ruhn named Chodala wield a power staff created by Sotha Sil called the Sunna'rah. Chodala believes to be the Nerevarine, thus stealing Sunna'rah to force the steps of the Nerevarine Prophecy. The Vestige needed a device to weaken the Sunna'rah and sought the aid of Barilzar to build such a device. The Vestige traveled to several Dwarven ruins including Nchuleft in the Grazelands to find the necessary pieces to build the item. The Vestige and Barilzar created the Tonal Inverter, and they confronted Chodala in the ruins of Kaushtarari.[3]

By 3E 427, the town of Tel Vos was established and soon took control of Vos after Tel Mora did during the Second Era. The Ahemmusa Camp had moved towards the northern cape of the Grazelands from their original home of the Bitter Coast. When the Empire was given free rein in Vvardenfell, they established a holding the Grazelands which would become Tel Vos. It was implied that House Telvanni took the previous Imperial stronghold and planted one of their Mushroom towers. Around this time, the actual Nerevarine arose and soon fulfilled the steps of the Nerevarine Prophecy. The Nerevarine traveled to the Ahemmusa and Zainab Camps to have the tribes recognize them as the true Nerevarine. The warrior later defeated Dagoth Ur top of Red Mountain and eventually ended the Tribunal.[4][5][6]

Vos, the Humble Farming Village of the North.

Tel Vos, the Fortress of the Grazelands.

Ahemmusa Camp, one of the four main Ashlander Camps in Vvardenfell.

Zainab Camp, one of the four main Ashlander camps in Vvardenfell. 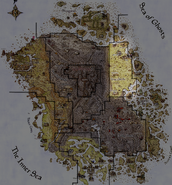 The Grazelands in Vvardenfell.
Add a photo to this gallery

Retrieved from "https://elderscrolls.fandom.com/wiki/Grazelands?oldid=3128089"
*Disclosure: Some of the links above are affiliate links, meaning, at no additional cost to you, Fandom will earn a commission if you click through and make a purchase. Community content is available under CC-BY-SA unless otherwise noted.