"Aren't you familiar with the cherished Black Marsh custom? Consuming various venomous concoctions to bolster our natural immunity? I drank so much my tongue turned green! Ha! The new initiates fall for that every time!"
―Green-Venom-Tongue to the Vestige[src]

Green-Venom-Tongue is an Argonian assassin residing in Dark Brotherhood Sanctuary.

Green-Venom-Tongue was once an assassin at a Sanctuary in the Blackwood Borderlands in Black Marsh. While out on a contract for several months, the Black Hand ordered the purification of his Sanctuary. As he had been away for so long, he was absolved of suspicion and transferred to the Santuary on the Gold Coast.

A Ghost from the PastEdit

A Ghost from the Past

At the end of the quest:

The Wrath of Sithis

The Black Dragon: "You'd kill me, Venom? You were my Brother once. Join me and forget your obligations."
Green-Venom-Tongue: "Join you? I'm going to send you to the Void, traitor!"

In Overlook of Time:

The Black Dragon: "The Dark Brotherhood is a pox. It deserves to be destroyed."
Green-Venom-Tongue: "What lies did Artorius fill your head with, Lyra?"

After passing the corridor overlooking the flooded hall:

The Black Dragon: "The Brotherhood. The Order. I'm done being used, Venom. Just leave me alone!"
Green-Venom-Tongue: "I can't do that, Lyra. You brought this on yourself."

After taking the other path: 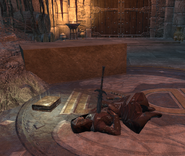 Retrieved from "https://elderscrolls.fandom.com/wiki/Green-Venom-Tongue?oldid=3045201"
*Disclosure: Some of the links above are affiliate links, meaning, at no additional cost to you, Fandom will earn a commission if you click through and make a purchase. Community content is available under CC-BY-SA unless otherwise noted.