Greenshade is the southwestern zone of Valenwood. Life flourishes beneath the lush canopy of Greenshade's graht-oak forest fed by snaking rivers, vast forests and plentiful resources that have left it greatly untouched by civilization. The capital city of the region is Woodhearth in the west that facilitates trade from the rest of Tamriel.[1]

"As the region of Valenwood farthest from all other realms, Greenshade's graht-oak forest is virtually pristine, the Tamriel jungle at its most primeval. Its capital is the trading port of Woodhearth."
―Loading screen[src]

Greenshade features a large proportion of Valenwood's tribal Bosmer populations who follow the Green Pact and are distrustful of others, including the Dominion.[3][4] The city of Marbruk was constructed by the Altmer to unify the local population with the culture of the Dominion, although others regard the city's existence as an act of "civic aggression."[5] In earlier times, the merchant thoroughfares of the region consisted of old tunnels that bypassed the dense terrain and dangerous wildlife. Such tunnels then came into almost exclusive use by black market traders. Local Bosmer are also known to thieve on traveling merchants.[4]

The following are locations accessible in Greenshade and, with the exception of unmarked locations, are discoverable on the map. Points of Interest serve as locations with unique side quests, while cities serve as the centralised areas with multiple sublocations and act as a hub for services and merchants. Explanations of the types of locations are provided in the main locations page.

Sixteen Skyshards can be found in Greenshade totalling in five skill points with one left over. The zone guide provides clues as to the location of each Skyshard, but many can be found simply by exploring and watching for the distinctive pillar of light they emit.

Thirty-two books that are a part of Shalidor's Library can be found in Greenshade and added to the collection. Books that have already been found in other zones will already be marked as completed in the zone tracker.

A roadway in Greenshade. 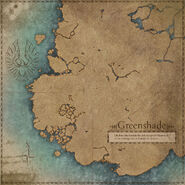 A map of Greenshade.
Add a photo to this gallery

Retrieved from "https://elderscrolls.fandom.com/wiki/Greenshade?oldid=3146090"
*Disclosure: Some of the links above are affiliate links, meaning, at no additional cost to you, Fandom will earn a commission if you click through and make a purchase. Community content is available under CC-BY-SA unless otherwise noted.