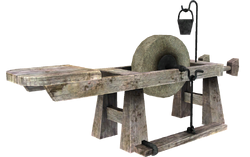 Grindstones can be used to improve weapons, by sharpening them and adding weight for extra damage.

Unlike in previous games, weapons in Skyrim no longer have durability, making the increase in damage and enchantments the only way to upgrade a weapon. Grindstones may be found in almost every corner of Skyrim's cities, towns, and even in mines, caves and forts.

Using a grindstone increases your Smithing level, although to a lesser degree than actually forging a weapon. Appropriate metal ingots are required to upgrade each item (i.e., Ebony Ingot for an Ebony Sword). However, certain weapons require more exotic materials in order to upgrade them, such as the chitin of a Chaurus for Falmer weapons, or even ingredients normally used in alchemy. There are six levels of upgrade available (from least to greatest): fine, superior, exquisite, flawless, epic, and legendary. Each upgrade level has a required skill level, and this level can be reduced with the perk associated with the type of weapon that the player wishes to upgrade.

Retrieved from "https://elderscrolls.fandom.com/wiki/Grindstone?oldid=3001219"
*Disclosure: Some of the links above are affiliate links, meaning, at no additional cost to you, Fandom will earn a commission if you click through and make a purchase. Community content is available under CC-BY-SA unless otherwise noted.