Guars are creatures part of a large reptilian family native to both Morrowind and Black Marsh, where they are domesticated by inhabitants of both regions for various purposes.

Guars are bipedal reptilian creatures native to both Morrowind and Black Marsh, which have been used as beasts of burden for eras.[1] More intelligent than horses; guar have been used for many varying purposes besides mounts and pack animals: including tracking in a similar manner to scent hounds and serving in combat alongside warriors.[2][3][4] As omnivores, the guar diet mainly consists of plant-based foods, but like their alit and kagouti cousins,[1] they have been known to occasionally consume flesh.[3] Normally docile, some guars have been known to be vicious when provoked: one pack guar, named Bittergreen the Wild, went mad and slaughtered an entire convoy at Caravan Crest in Deshaan, during the Second Era. In Morrowind, guars serve as the dominant domesticated herd animal, often used as beasts of burden and bred for their hides and meat.[5] They can be both striped and plain, and are especially so the former on the Deshaan Plains. 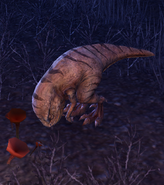 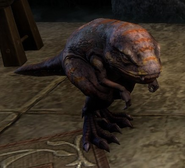 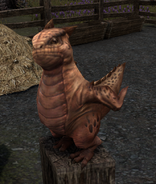 Notice: The following are unlicensed references. They are not copyrighted by a ZeniMax Media company, but can still be considered part of The Elder Scrolls lore and are included for completeness.
Español Français Українська
*Disclosure: Some of the links above are affiliate links, meaning, at no additional cost to you, Fandom will earn a commission if you click through and make a purchase. Community content is available under CC-BY-SA unless otherwise noted.
Advertisement