For other uses, see Hagraven.

"This Hagraven was horrifying, almost human but more an abomination of woman and creature [crow] fused together, nothing more than a husk of humanity surrendered in exchange for possession of the powers of dark magic."
―Herbane[src]

Hagravens are aggressive humanoid creatures with bird-like features found across Skyrim. Coming in contact with one can cause brain rot, a disease that lowers the victim's magicka.

According to legend, they were apparently once witches but exchanged their humanity for the ability to become hagravens.[1] They bear a vitriolic hatred against nature, and hunt down spriggans to capture and sacrifice. The Forsworn revere them greatly,[2] and it is noted that the hagravens were in the Reach since "the beginning."[3][4] Once, they served as mercenaries alongside Bjoulsae horsemen, during the battle of Ain-Kolur.[5]

Hagravens are hideous, avian-like, female humanoids with scraggly gray hair, pale skin, hooked noses and solid black eyes. Their limbs are long and bony, and their hands and feet each have four digits ending in sharp talons. They dress in tattered black garments and have black raven feathers bound to their shins and forearms.

In exchange for their sacrificed humanity, hagravens gain enhanced magical powers that trump most other witches and warlocks. In addition to 10% resistance to spells, hagravens can cast powerful spells such as Fireball and Ice Spike. They prefer to keep their distance, lobbing spells at any would-be attackers. Even in melee combat, they are a force to be reckoned with, employing a claw attack, potentially infecting enemies with brain rot. They can also cast healing spells on themselves when damaged or fleeing. 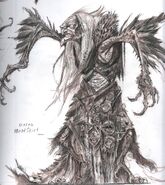 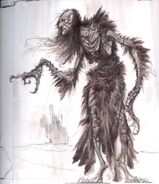 Hagraven concept art
Add a photo to this gallery