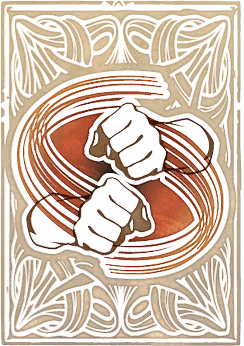 For other uses, see Hand-to-Hand.

Proficiency in the Hand-to-Hand combat arts skill provides the player the ability to attack, damage, and fatigue opponents, even ghosts, without weapons. Experience in hand-to-hand combat can be just as deadly as wielding a sword. (From the Elder Scrolls website)

Thick calluses cover your knuckles and joints from long hours of punching and kicking. At long last you are a Journeyman in Hand to Hand combat. Your Sidestep power attack now has a chance to disarm your opponent. Press and hold Attack while moving left or right to use this power attack.

You are now an Expert in Hand to Hand combat. You gain the Sweeping power attack, with a chance to knock down your opponent. Press and hold Attack while moving backwards to use this power attack.

To increase the power of your punches one has to increase fatigue, strength, and skill. At the height of all three, one could do up to 15 damage per punch.

Retrieved from "https://elderscrolls.fandom.com/wiki/Hand-to-Hand_(Oblivion)?oldid=3142220"
*Disclosure: Some of the links above are affiliate links, meaning, at no additional cost to you, Fandom will earn a commission if you click through and make a purchase. Community content is available under CC-BY-SA unless otherwise noted.