Absorbs 15 points of Health, Magicka, and Stamina if wielded by a vampire.

Steel Smithing
Harkon's Sword is a unique one-handed sword that appears in The Elder Scrolls V: Dawnguard. It is similar in appearance to the Blades Sword but with a different color and guard, or tsuba. It also has a notably lower base damage than the regular Blades Sword, which has a base damage of 11.

Closely resembling the Blades Sword in the base game, it is identical in every detail to its regular counterpart, but what sets it apart are its colors and tsuba (sword guard) forming two bats on either end of the blade, and this sword is golden, while the Blades sword is silver in color. Even though it has a great value and is unique, its base damage is notably low in ratio to other one-handed weapons. Although, it can be upgraded by Smithing.

It is obtainable by defeating Harkon in Kindred Judgment. It can be pickpocketed with the Misdirection perk, but this is very difficult given its high value.

The sword bears a unique enchantment, which will only work if the wielder is a vampire. It causes the screen to go slightly dark with each successful strike.

The sword has a powerful enchantment, so it is recommended to have a large stock of filled soul gems if planning on using the sword regularly as it runs out of charges quite quickly. Alternatively, one can increase the number of charges on this weapon by enchanting gear with "Destruction spells cost X% less to cast." The higher the value, the more uses one will get from the weapon. 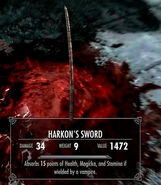 The weapon itself, along with its stats.
Add a photo to this gallery

Retrieved from "https://elderscrolls.fandom.com/wiki/Harkon%27s_Sword?oldid=3056560"
*Disclosure: Some of the links above are affiliate links, meaning, at no additional cost to you, Fandom will earn a commission if you click through and make a purchase. Community content is available under CC-BY-SA unless otherwise noted.