"Ulstyr, I don't think we've ever met, but my name is Minevah," she said, approaching the table. "I'm fancying a trip to the Heran Ancestral Tomb. If you think you could handle the monsters, I could take care of unlocking doors and popping traps. What do you think?"
―Mineva[src]

When first entering the tomb, there is a locked door (easy to pick); the key is on the wall on the right near the entrance. There are three Daedra guarding the tomb and there is a shrine to St. Veloth located inside.

The following items can be found here:

Image from within the tomb 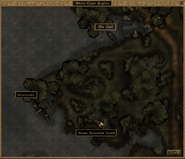 Retrieved from "https://elderscrolls.fandom.com/wiki/Heran_Ancestral_Tomb_(Morrowind)?oldid=3127246"
*Disclosure: Some of the links above are affiliate links, meaning, at no additional cost to you, Fandom will earn a commission if you click through and make a purchase. Community content is available under CC-BY-SA unless otherwise noted.