For the quest of the same name, see Hermaeus Mora (Quest).

), also known as Hoermius, Hormaius,[1] Hermorah,[2] Herma Mora,[1] the Woodland Man,[3] and the Gardener of Men,[UL 1] is the Daedric Prince of knowledge and memory; his sphere is the scrying of the tides of Fate, of the past and future as read in the stars and heavens.[4] He is not known for being good or evil; he seems to be the keeper of both helpful and destructive knowledge, although he usually sees all seekers of any knowledge as his servants.

"Hermaeus Mora is the daedric prince of fate, knowledge and memory. In his rare dealings with mortals, he often chooses to appear as a grotesque mass of tentacles."
―Skyrim loading screen

Also called the Demon of Knowledge, he is vaguely related to the cult origins of the Morag Tong if only by association with his sibling, Mephala.[3] He usually chooses to appear to mortals as a void of darkness, or as a grotesque mass of tentacles and eyeballs.

He will offer potential servants knowledge that they desire in return for serving him, though many legends, such as those around his Nordic aspect Herma-Mora involve him tricking seekers to gain their knowledge. He is also known to betray his servants to their deaths when he perceives them as having outlived their usefulness to him.

Hermaeus Mora maintains a realm in Oblivion called Apocrypha, where all forbidden knowledge can be found. It is an endless library, with shelves stretching onward in all directions, stacks on top of stacks. Every book has a black cover with no title. Masses of ghosts move through the stacks, rifling through books, eternally searching for the knowledge they sought whilst living.[5]

This realm can be accessed via Black Books, which can give the reader special abilities. The halls are filled with Seekers who read books and guard the realm. Some areas have Lurkers who also guard the realm and sometimes appear in the mortal realm, unlike the Seekers. It does, however, lack the ghosts mentioned in the above paragraph.[6]

The realm of Apocrypha appears as an endless sea of roiling black oil, with greasy tentacles slithering about the waves beneath a green-tinged sky full of dark clouds and numerous portals through which Hermaeus Mora travels. Rising up from this sea are many cathedral-like structures build of crumbling stone and iron walkways, with books and scrolls crammed haphazardly into countless shelves, or else stacked in massive spiraling towers. The only known residents other than various ghosts are Seekers, Lurkers, and Miraak together with his dragons.[6]

Hermaeus Mora is associated with the ancient tome of knowledge, the Oghma Infinium, apparently given by Mora to Xarxes, the scribe of Auri-El.[7] The knowledge was then, in turn, passed over to Mehrunes Dagon, and was used to write the Mysterium Xarxes.[source?]

The Eternal Champion was able to retrieve the Oghma Infinium from the deep frozen wastes of Skyrim;[8] at that time Hermaeus Mora did not interfere. Then, the Hero of Daggerfall was recorded as the wielder of the tome, sometime in the late Third Era.[9] 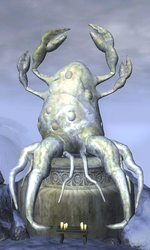 The summoning date of Hermaeus Mora is the 5th of First Seed.[UL 1][11] The Hero of Daggerfall quested for the Oghma Infinium by summoning Hermaeus Mora.

The Shrine of Hermaeus Mora is located on a remote plateau deep within the northwestern portion of the Jerall Mountains (possibly due to the fact that he is within the Pantheon of Skyrim, thus being closer to where he is worshipped). After following the path of requirement, the Hero of Kvatch was then able to summon Hermaeus Mora, and was asked to bring one soul of each of the sentient races of Tamriel, so that his followers are able to perform a divination. The Hero was then awarded the Oghma Infinium, furthering their journey on the true path.

Two hundred years after the Oblivion Crisis, the tome would once again become lost. Upon finding an Elder Scroll housed within an Oculory inside the Tower of Mzark, Blackreach, the Dragonborn returned to Septimus Signus, the crazed mage who told the Dragonborn where to find the Elder Scroll during "Discerning the Transmundane" and Skyrim's Main Quest.

Septimus had given the Dragonborn a Blank Lexicon which was needed to unlock the Oculory that the Elder Scroll was in. The Blank Lexicon was transformed into a Runed Lexicon, and while doing this, the Lexicon absorbed the infinite amount of unknowable information contained within the Elder Scroll. Upon returning the Lexicon to Septimus, the mage used it to discover the way to open an ancient Dwemer vault. It turns out that Septimus is a follower of Hermaeus Mora, and had been told by the Daedric Prince that the vault contains an artifact of great knowledge and power, the Heart of Lorkhan. In order to open the vault, Septimus must have a sample of blood from all the races of Mer, or Elves. This meant the blood of an Altmer, a Dunmer, a Bosmer, an Orsimer, and a Falmer to recreate the Dwemer blood needed to open the lockbox.

Upon accepting the hunt for these samples of blood, the Dragonborn is contacted by Hermaeus Mora, who appears to them in the form of a Wretched Abyss, or a collection of tentacles with one large eye, if The Elder Scrolls V: Dragonborn is installed. Hermaeus Mora says that Septimus has been a useful tool, but his usefulness will have run out once the vault is open. To that end, Mora commands the Dragonborn to seek out the blood as requested by Septimus, but later after collecting the blood and returning to Septimus, and upon opening the Dwemer vault, Mora disintegrates the mage.

It is revealed that the artifact that was hidden within the Dwemer vault is the Oghma Infinium. After collecting the Oghma Infinium, Mora once again appears as a void in front of the Dragonborn to name them as his new champion. As with previous incarnations of this tome, it functions as a skill tome that greatly boosts the skill levels of all talents relating either to warriors, rogues, or mages.

Sometime before the First Era, the dragon Priest Miraak gave his allegiance to Hermaeus Mora in exchange for being granted the knowledge that would give him great power. With his new found power, Miraak turned against his dragon masters, but was confronted by Vahlok the Jailor, another dragon priest. The battle lasted for days and, despite the outcome being unknown, Hermaeus Mora supposedly intervened, pulling his champion into the realm of Apocrypha to save him. Miraak remained as Mora's champion, albeit using his powers to his own ends and plotting to escape Apocrypha. Sometime during the Fourth Era, the Dragonborn traveled to Apocrypha through the use of a Black Book, an artifact created by Mora to lure mortals into his realm. Mora then spoke to the Dragonborn and offered them the same power that was given to Miraak, as long as they defeated him. He also promised to teach the Dragonborn the second and third words of the Bend Will shout. The second word was given freely. However, the third word was granted in exchange for the Skaal's wisdom and the life of their shaman, Storn Crag-Strider. After learning the second and third Words of Power, the Dragonborn traveled back to Apocrypha and battled with Miraak at the realm's summit. Near defeat, Miraak attempted to escape death by submerging himself into the waters of Apocrypha, but was promptly impaled by Mora's tentacles. Miraak then died of his wounds, and his soul was absorbed by the Dragonborn. Mora then gave Miraak's status as his Champion to the Dragonborn.

Hermaeus Mora as he appears in The Elder Scrolls II: Daggerfall.

Hermaeus Mora as he appears in The Elder Scrolls Online.