Not to be confused with Hew's Mane.

"During the early days of the Ra Gada, Prince Hubalajad claimed this Hammerfell peninsula for his own. When all his ambitious endeavors ended in failure, the region acquired the nickname Hew's Bane―and it stuck."
―Hew's Bane Loading Screen[src]

Hew's Bane also known as Khefrem's Boot,[1] is a zone available in The Elder Scrolls Online: Thieves Guild.[2] It is a barren peninsula located on the southern coast of Hammerfell, with the bustling seaport of Abah's Landing as its only settlement.[3] Hew's Bane itself is part of a large region of Hammerfell known as Khefrem.[4]

Hew's Bane was originally colonized by the second wave of Redguards from the sunken continent of Yokuda, led by Prince Hubalajad.[3] It is home to the Khefrem Academy of Yokudan Heritage.[5] 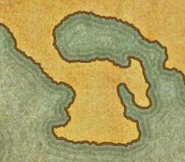 Map of Hew's Bane in Tamriel, prior to Update 9

Retrieved from "https://elderscrolls.fandom.com/wiki/Hew%27s_Bane?oldid=3112907"
*Disclosure: Some of the links above are affiliate links, meaning, at no additional cost to you, Fandom will earn a commission if you click through and make a purchase. Community content is available under CC-BY-SA unless otherwise noted.