For other uses, see High Hrothgar.

"High Hrothgar is a very peaceful place. Very... disconnected from the troubles of this world."
―Balgruuf the Greater[src]

High Hrothgar is a monastery that sits at the top of the Seven Thousand Steps to the Throat of the World — the highest point in Tamriel. It is here the ancient Greybeards reside, living in absolute silence to better attune themselves to the voice of the sky.[1]

The act of climbing the Seven Thousand Steps holds a spiritual significance for many Nords due to the belief that Men were created by Kyne on this mountain when the sky breathed onto the land. This belief has led to pilgrims from all across Tamriel traveling to the Throat of the World, and several may be encountered along the mountain path either meditating or studying the etched tablets.[1]

The path leading to High Hrothgar begins in the village of Ivarstead—across the main bridge in the northwest side of town. The mountain path itself is treacherous and is host to a multitude of dangerous creatures such as frost trolls, ice wraiths, snow bears, ice wolves, Frostbite Spiders and occasionally dragons.

There are banners hanging throughout the interior of High Hrothgar. Despite how many hang, there are only two separate phrases written on them and the positioning when they are first encountered seems to indicate they are meant to be paired. In the picture, the one on the left reads "LOK BO" and the one on the right reads "THuuM TuuM." Unfortunately, a complete translation cannot be made as not enough of the language is known to translate it from simply 'reading into it'. We do, however, know that LOK is 'Sky' and THuuM (Thu'um) is 'Shout' or 'Storm Voice'. Therefore, it is likely that the banners translate to the phrase that Arngeir frequently speaks to the Dragonborn after they leave conversation with him: "Sky above, voice within."

The courtyard of High Hrothgar can be accessed from within the temple. The courtyard itself is relatively sparse, with only a few trees and stone pillars. A large double gate is off to one side where the Greybeards practice the Whirlwind Sprint shout. A large tower dominates the opposite end, where Arngeir occasionally meditates at the top. Occasionally, one of the Greybeards will meditate by the cliffside—he will stand up to shout at the sky, then continue meditating.

The Way of the Voice[]

After the completion of Dragon Rising, a powerful shout will be heard from the mountains close to Whiterun. Upon talking to Jarl Balgruuf, it is revealed that the shout was uttered by the Greybeards, summoning the Dragonborn to High Hrothgar.

At the base of the steps, there is a man called Klimmek with supplies meant to be taken up to the Greybeards. These supplies can be delivered to the chest outside High Hrothgar for a leveled amount of 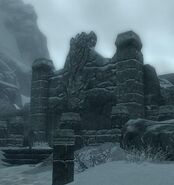