For the quest in Oblivion, see The Hist.

The Hist are a race of sentient trees that are said to have once been spread over a wide area of Nirn, but are now almost solely confined to Black Marsh.[1] Some claim that they are the most ancient race on Nirn.[1][2] They are associated with the Argonians, who venerate them, but they are not worshipped in the traditional sense of the term.[3]

Information on the Hist is scarce, as the Argonians do not readily share such information with others, and may even view such sharing as a betrayal of their race.[2][4]

The Hist are a kind of tree in appearance. Some say the Hist are mobile,[5] although this has not been verified beyond rumor. They draw water not only as a source of nourishment, but also a repertoire of memories, although this may be figurative.[6]

The Hist are interconnected with each other, and can communicate with one another through that link.[7] They also communicate with those who ingest Hist Sap in the right manner,[8] and are considered by Argonians to be a part of them, on a level that is potentially biological.[9] Hist roots stretch very far, deep into the heart of Nirn and out into distant lands.[10] Hist trees sometimes sprout large hanging flowers, which emit an either red or blue glow. One tribe located deep within Black Marsh are said to be dedicated to ice magic and have Hist trees that drip with icicles.[11] "Hist-Brothers" are shadowy lurchers encountered during the quest "The Dream of the Hist," and are the embodiment of various Hist Trees seen throughout Shadowfen.[12]

The Hist produce a sap that is used by Argonians in a variety of cultural practices, as well as which stimulating particular growth patterns in the Argonian, which determine its gender.[13] The sap also induces visions for Argonians, who treat these as sacred experiences.[14] It is also prized by other races as an ingredient,[15][16] and tainted samples can function as a hallucinogen.[17] In sufficient quantities, the sap is poisonous to all races.[14] Hist sap that bleeds from Hist roots buried deep underground is known as "deep sap."[18]

"The Hist gave his people life, form, purpose. It was the Hist who had seen through the shadows to the Oblivion crisis, who called all of the people back to the marsh, defeated the forces of Mehrunes Dagon, drove the Empire into the sea, and laid waste to their ancient enemies in Morrowind."
―Mere-Glim[src]

Argonians consider the Hist to be the source of all life.[8] According to the Anuad, they are mentioned as being one of the two forms of life to emerge from the ruin of the Twelve Worlds, the other being the Ehlnofey.[1] It is also claimed that the Hist originated from Oblivion,[19] although it is possible that they merely fled there to escape the decimation of their realm on Nirn.[7] Since Umbriel also came from Oblivion, the trees in Umbriel could be cousins of the Hist. The trees from Clavicus Vile's realm are vaguer than the Hist, not as intelligent or maybe simpler. But like the Hist, they can form their sap into different things, and they can shape life, change its form.[20]

At some point in history, much of the Hist's realm on Mundus disappeared. Some claim this happened as a result of the Ehlnofey wars,[1] although other sources claim that the Hist were decimated later, when the Dwemer chopped them down for wood.[21] There is an account of the Hist of Haj Uxjith taking its Argonians and fleeing to Oblivion to avoid this fate in the "ancient past,"[7] which may refer to the event mentioned in the Anuad.

The Hist brought Argonians back to Black Marsh to defend against the Oblivion Crisis at the end of the Third Era, directing them in attacks that defeated Mehrunes Dagon's forces, and then on to the subsequent invasion of Morrowind following the Red Year.[19]

A rogue Hist was part of the creation of Umbriel in the early Fourth Era.[19]

The Hist do not have a distinct culture of their own that has been disclosed in any great depth. In theory the link they share allows them to operate in unison, suggesting a monolithic mindset. On occasions divergent opinions emerge among the Hist. This results in them being "purged" from the other Hist, as was done by the Hist of Lilmoth in the Third Era.[19]

Relationship to the Argonians[]

The Argonians revere the Hist, considering them to be both their prior existence and their afterlife.[21][22]

The Hist form part of many Argonian cultural rituals, as well as forming a central part of Argonian tribal village life.[15] It is possible that the Hist form the root of their social structure, with each village forming around a single Hist tree.[UL 1] Argonians claim the ability to communicate with the Hist, although precise practices for doing so vary from tribe to tribe of Argonians.[14] This communication takes on the significance of religious guidance for Argonians.[23][24] The Bright-Throat Tribe believes that their Hist communicate through the wind, and they create chimes in order to receive its messages.[25][18]

The Hist play a central part in an Argonian's coming-of-age ceremony, whereby they ingest Hist sap, and are formally named.[13][26] It is also possible that the ingestion of sap also affects the social awareness of Argonians,[27] although this may be a function of Argonian society in general. Some Argonians also believe that the Hist guide their choice of mate.[28] This has been recorded as an annual event by some scholars,[5] although accounts of individual couplings exist.[28]

In extreme circumstances, the Hist have communicated with the entire Argonian race, as well as altering large numbers of them when they ingest Hist sap.[29] This was done during the Oblivion Crisis, where the Hist recalled many Argonians to Black Marsh and invaded the Oblivion Gates, closing them, and co-ordinated the later invasion of Morrowind.[19]

It is possible that the Hist feel the need for Argonians around them and consider them their "children,"[6] but this may be a literary device.

Concept art of a Hist Tree for The Elder Scrolls Online. 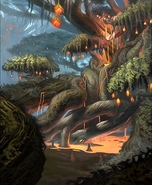 A blue flowered Hist Tree of the Dead-Water Tribe. 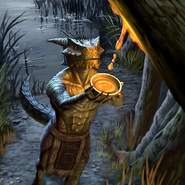 A bottle of Hist sap, as seen in The Elder Scrolls Adventures: Redguard.

Notice: The following are unlicensed references. They are not copyrighted by a ZeniMax Media company, but can still be considered part of The Elder Scrolls lore and are included for completeness.
Deutsch Español Français Italiano Русский Українська
*Disclosure: Some of the links above are affiliate links, meaning, at no additional cost to you, Fandom will earn a commission if you click through and make a purchase. Community content is available under CC-BY-SA unless otherwise noted.
Advertisement