Hlervu Locket is an unique amulet in The Elder Scrolls III: Morrowind. It is a prized possession of the family of Braynas Hlervu, but was taken from him when he could not pay his taxes. During the quest "The Hlervu Locket," it must be stolen from within Venim Manor and given back to his owner.

The Hlervu Locket can be found behind a locked door in the Guard Quarters inside Venim Manor. It lies open on a chest.

The Hlervu Locket is a quest item in the Thieves Guild quest. Gentleman Jim Stacey tasks the Nerevarine to act in the name of the Bal Molagmer, who stole from the unjust to give to the needy. The theft of the Hlervu Locket to bring it back to its original owner is the first quest of the faction. 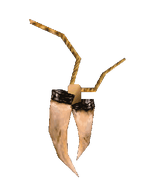 Hlervu Locket with hlervu_locket_unique ID
Add a photo to this gallery

Retrieved from "https://elderscrolls.fandom.com/wiki/Hlervu_Locket?oldid=2654988"
*Disclosure: Some of the links above are affiliate links, meaning, at no additional cost to you, Fandom will earn a commission if you click through and make a purchase. Community content is available under CC-BY-SA unless otherwise noted.