Have a picture of Hoknir? Then please upload it! For more information please consult our image policies

"I've been hunting beasts in the wilds of Skyrim all my life. Deathclaw ravaged a couple of herds near Kynesgrove. I took on a contract to end him. I always fulfill my contracts"
―Hoknir[src]

Hoknir is a Nord hunter residing on Bleakrock Isle. He can be found near Deathclaw's Lair. He was seriously injured in a recent battle with Deathclaw and was forced to use parts of his leather to make a tourniquet.

Find the missing villagers to help them escape. Not all of the villagers need to be found to complete this quest; however, they will disappear forever if they are not saved.

The Vestige encounters a wounded hunter in the wilds near Bleakrock Village. Hoknir is seriously wounded. He wants some help killing his prey. They should be able to find the lair of Deathclaw by following the trail of things he dropped. Once I do, the beast might come out for some food.

Hoknir can still be found with this quest even if one has previously evacuated the isle during "Escape from Bleakrock."

"Curse that Deathclaw! Ate my foot. I had to use my boot and some leather as a tourniquet. Damn it!"

What happened? "I've been tracking the beast for weeks. I call him Deathclaw. I finally caught up to him, but it ... well, it went badly."

If I can find him, I'll get him for you. "Now there's a plan. If you bag him, I'll toss you some coin for your trouble. As I made my escape, some stuff fell out of my pack. You should be able to follow what I dropped like a trail back to his lair."

I'll track him down, Hoknir. "Follow the trail I left when I made my escape. You'll know his lair by the bones, blood, and smell. Tempt him with some game, and I bet you'll get attention."

Why have you been tracking this beast? "I've been hunting beasts in the wild of Skyrim all my life. Deathclaw ravaged a couple of herds near Kynesgrove. I took on a contract to end him. I always fulfill my contracts."

"I'm going to have to head back to town soon, my friend. Lost a lot of blood. How goes the hunt?"

I've killed him, Hoknir. "A hunter with the heart of Ysgramor! Here's the coin I promised. I'll sing your praises next time I see the inside of a mead hall. Don't worry about me. I know the way back to town, wound or no wound." 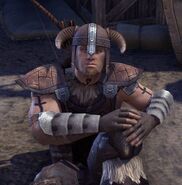 Retrieved from "https://elderscrolls.fandom.com/wiki/Hoknir?oldid=3035144"
*Disclosure: Some of the links above are affiliate links, meaning, at no additional cost to you, Fandom will earn a commission if you click through and make a purchase. Community content is available under CC-BY-SA unless otherwise noted.