Not to be confused with Jolgeir.

"Now we can rest in peace once again. Come Fjori, my love..."
―Holgeir to the Last Dragonborn[src]

Holgeir was a warlord in the forests of Skyrim before the dragons returned.

He met Fjori, a huntress, when she was 29 years old. The two battled, falling in love when Fjori broke his axe with her sword, and he dulled her sword with his shield. Shortly after, Holgeir was bitten by a venomous snake.

Fjori obtained an elixir from the Akaviri and saved Holgeir's life. Her love fully-restored, she too was bitten by the same snake after the elixir was used up, falling dead. Holgeir built a tomb for her, killing himself after its completion.[1]

A Love Beyond Death[edit | edit source]

Based on the player's level, he spawns as a leveled draugr, or even possibly a Dragon Priest. After Lu'ah is defeated, Holgeir appears alongside Fjori as a ghost, and awards the Ghostblade to the Dragonborn for freeing them.

Fjori: "Thank you (Referring to the Dragonborn.) for releasing us from her spell."
Holgeir: "Now we can rest in peace once again. Come Fjori, my love..."
Fjori: "Take this (Referring to the Ghostblade.) with our gratitude." 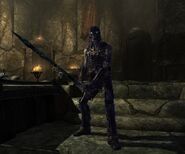 Retrieved from "https://elderscrolls.fandom.com/wiki/Holgeir?oldid=3077017"
*Disclosure: Some of the links above are affiliate links, meaning, at no additional cost to you, Fandom will earn a commission if you click through and make a purchase. Community content is available under CC-BY-SA unless otherwise noted.