"A strange being created by a high level Wizard who has somehow combined the properties of certain spells with parts of various demons. These creatures are often set to guide areas, using their ability to fly to patrol corridors."
―Official Arena Player's Guide.[src] 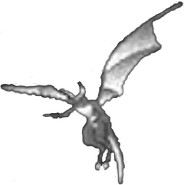 Retrieved from "https://elderscrolls.fandom.com/wiki/Homonculus?oldid=2980141"
*Disclosure: Some of the links above are affiliate links, meaning, at no additional cost to you, Fandom will earn a commission if you click through and make a purchase. Community content is available under CC-BY-SA unless otherwise noted.