For other uses, see Horker.

Horkers are large, walrus-like creatures that are found around the island of Solstheim and in the northern regions of Skyrim.[1] The horkers of Skyrim are often hunted for their meat and tusks.[2]

Horkers are slow and can easily be outrun. They don't do much damage by themselves, and often live in cooler areas. Horkers will not necessarily attack on sight, though if entering close proximity, they will attack by slashing with their three large tusks. This can be a fatal problem at lower levels if surrounded.

Usually, horkers are found near cold water. Many inhabit the ice floes of the southern Sea of Ghosts, in the northern Winterhold Region as well as The Pale, Hjaalmarch and the Haafingar regions.

Horkers are social creatures, often found in groups of three to five. When approached, horkers will turn to face the Dragonborn and will roar at them until they return to a far enough distance not to alert them. If one is harassed or attacked, the entire group will become aggressive.

Although resilient and fast in deep water, they are slow and easy to avoid on land. This makes them easy targets, especially for ranged attacks. When badly injured, horkers often flee. Although they lie next to cold waters and are quite fleshy, they are not resistant to frost.

With the addition of Hearthfire, Horker trophies can be made for the Trophy Room in one's Homestead: 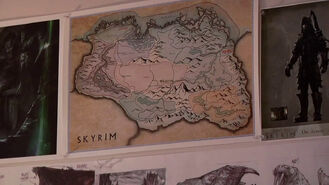 Horker concept art can be seen at the bottom right of this screen capture. 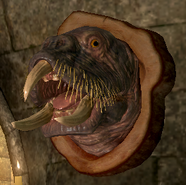 A taxidermied horker head mounted on a plaque in The Winking Skeever. 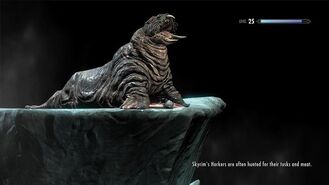 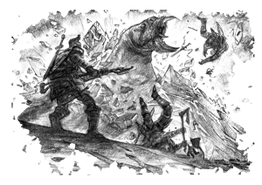 Deutsch Español Français Italiano Polski Русский
*Disclosure: Some of the links above are affiliate links, meaning, at no additional cost to you, Fandom will earn a commission if you click through and make a purchase. Community content is available under CC-BY-SA unless otherwise noted.
Advertisement