For other uses, see Horse.

A Horse is a buyable form of transportation in nearly every The Elder Scrolls game. In Daggerfall, they can be found in general goods stores in every town. They cost usually around 1,000

but with simple trading skills, the player can own a horse fairly early in the game, making travel much shorter and faster. The horse is the fastest means of transportation, next to fast travel. The horse is faster than the small cart, and in turn, the cart is faster than walking/running. The player can attack while on horseback, though it is commonly complained to be sluggish and in some times, unfair to the player. If a horse happens to disappear, the player can check the automap to find it, or even ask civilians of a town.

Any store in any town can sell a horse. They are decently cheap, so the player can get them early to shorten travel between dungeons, or even across the huge map of Daggerfall. 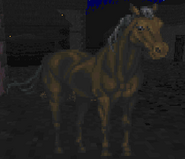 View while on the back of a horse.
Add a photo to this gallery

Retrieved from "https://elderscrolls.fandom.com/wiki/Horse_(Daggerfall)?oldid=2835348"
*Disclosure: Some of the links above are affiliate links, meaning, at no additional cost to you, Fandom will earn a commission if you click through and make a purchase. Community content is available under CC-BY-SA unless otherwise noted.