House Dagoth,[1] the Sixth House, Shadow House[2] or Sleeping House,[3] was one of the Great Houses of Morrowind. Ruled by Dagoth Ur, "Voryn Dagoth," the crest of the house is an insect.[4]

Generic members of the Great House were the following.

"The Sixth House cannot be restored without war. Enlightenment cannot grow without the risk of upsetting the tradition-bound and complacent herd."
―Voryn Dagoth[src]

Little is known of the beliefs of House Dagoth. In terms of tradition, it is House custom for the Dagoths to allow a challenger to strike the first blow during combat.[5][6] During the Third Era, the members of the House welcomed all "true Dunmer", and aimed to "drive the n'wah" from Morrowind.[3] The Blight was created by Lord Dagoth Ur, and aimed to kill foreigners in Morrowind. The ones opposing Lord Dagoth would die from the disease, while those who would follow him, would instead find strength and healing. The Great House also opposed the usage of necromancy, as well as vampires.[7]

Further aims of the House was removing all individuals of inferior and mongrel races from the province, driving the Empire out, and reclaim lands lost to Skyrim and Argonia.[8] Followers of House Dagoth believed that the House was falsely denounced as the house of traitors, and the other Houses attempted to destroy the House for eternity.[7]

The goal of the Sixth House during the Third Era was to establish a theocracy under worship of Akulakhan, the Second Numidium. The god-priests of this new religion would be the ancient heirs of House Dagoth, with the House itself becoming the new dominant power in the province. With the rise of this new religion, House Dagoth also aimed to remove the Tribunal Temple from power. The worship of Akulakhan was meant to be extended to every nation of Tamriel.[8] Within the shrines of the Sixth House, Ash Statues could often be found, alongside various offerings, as well as bells of the Sixth House, including the Sixth House Bell Hammer used to ring them.[9]

Akulakhan would serve a number of purposes, primarily it would serve as the champion of the armies of House Dagoth, first liberating Vvardenfell, and then Morrowind, with possibly the rest of Tamriel following afterward. It would also serve as a sower and cultivator of the divine power obtained from the Heart of Lorkhan. Its final purpose was to serve as the banner and symbol of the cause of House Dagoth—defying the Empire, liberating mortals from ancient superstitions, and to glorify the crusade against the gods.[10]

After having taken control, the plan for the Sixth House was to form the elite cadre of Dagoth Ur's movement. Cultists would expand depending on their enlightenment, becoming either holy warriors or priests. The duty of these warriors and priests would be to prepare themselves for service, while their joy and liberation would be learning more of the divine dreamworld.[10]

The Sixth House recruited their followers during the Third Era through dreams. One of the major bases of operation for this ordeal were the ruins of Kogoruhn, with smaller bases being in port villages and the waterfront districts in Vivec. Other recruitment aimed to go through smuggling syndicates, but also willing recruitment from disaffected populations, such as the poor and people with anti-Imperial sympathies.

This form of recruitment would continue to expand, with new bases in regular towns and villages, as well as abandoned structures such as ruins or towers. Corrupted cultists would also be trained as raiders and irregular troops for the House, while political resistance was fought back as much as possible. Through assassinations and terror, the House also aimed to weaken, distract, and disrupt the Imperial Legions stationed within Morrowind, as well as their Hlaalu allies. In doing so, inspiring uprisings by the native poor against rich and powerful foreigners, all the while Sleepers and Dreamers would work on Akulakhan.

With new cultists, the House gained new followers, with corprus beasts being created from weaker cultists, whereas the stronger ones became Ascended Sleepers.[8]

During the First Era, House Dagoth, specifically Dagoth Ur, provided Indoril Nerevar proof that lord Kagrenac had discovered the Heart of Lorkhan, and was tapping into its power. With this power, Kagrenac was creating a new God which was a powerful and fearsome weapon of its own. Nerevar would then travel to Holamayan, asking Azura for guidance, he learned that what Dagoth Ur said was the truth. As a result, Nerevar opted for war.

During their battle with the Dwemer, Dagoth Ur, Nerevar, and a number of soldiers fought against the Dwemer in Red Mountain, until the Dwemer disappeared. Dagoth Ur proposed destroying Kagrenac's Tools, hoping to prevent the tools from falling in the wrong hands. After changing words with the Tribunal, it was decided to keep the Tools by Nerevar and the Tribunal.[1] However, when Azura was being summoned, the Tribunal murdered Nerevar. When the Tribunal entered Red Mountain, the Chimer had changed into Dunmer, and Dagoth Ur had noticed this change. Seeking to avenge the death of Nerevar, he fought back, but to no avail. Dagoth Ur was driven off and presumed dead,[11][12] though it has also been said that Nerevar himself struck down Dagoth Ur.[13]

Ever since 2E 882 Dagoth Ur and his kin have been awake, moving into the Heart Chamber of Red Mountain. Dagoth Ur uses a ritual to bind himself, as well as high brethren as heartwight, in a ritual of his own devising. Construction of Akulakhan also begins, with the heartwights and atronachs creating a chamber near the Heart of Lorkhan. When the Tribunal arrived that same year for their annual ritual to use the Heart's power, the Sixth House ambushed them, and drove them away.[8]

The awakening of Dagoth Ur and his kin is said to have played a role in the signing of the Armistice, as Tiber Septim was hesitant to fight the Tribunal and having to deal with Dagoth Ur.[19]

Ever since 2E 882, several Tribunal campaigns assault the Red Mountain, seeking to force access into the Heart Chamber, however, the Sixth House successfully bested them back at every assault.[8]

In 3E 400, Dagoth Uthol successfully reoccupies Kogoruhn and forties it as an advance base for the Sixth House. The Blight storms becoming more frequent, and soul sickness spreads in the regions close to the Red Mountain. Ten years later the village of Gnaar Mok and the waterfront districts of Vivec housed Sixth House bases, with operatives from the House also exploiting smugglers to spread their influence.[8]

As of 3E 415, every town in Vvardenfell had small cells of followers of the Sixth House, with the larger operations being centralized in remote dungeons, where creatures are bred and the followers are trained. A mere two years later, Dagoth Odros and Dagoth Vemyn manage to take the artifacts of Sunder and Keening from Almalexia and Sotha Sil, with both the Tribunes being rescued by Vivec. While the Temple and Buoyant Armigers are aware that Almalexia and Sotha Sil were forced to retreat, nobody was certain what damage had been done to them. The Temple recognizes something has happened, but does not take the problem seriously.[8] In the years 3E 426 and 427, Sixth House assassinations occurred against prominent Imperial citizens and members of House Hlaalu. The House itself becoming more aggressive, starting attacks by both cultists and victims from soul sickness.[8]

During the late-Third Era, followers of House Dagoth believed that Morrowind had grown weak, and the Dunmer were no more than slaves ruled by foreigners. They aimed to create a Morrowind for the "free and proud Dunmer."[7] Within Vivec, the Dreamer Prophet was responsible for the killings of a number of foreigners, as well as two Ordinators for the House.[20] The people of Vvardenfell suffered from the sleepers, who would often engage with non-Dunmer in combat, wielding clubs. When arrested, they provided nothing of value, only mumbling about Dagoth Ur and the Sixth House.[21]

The Tribunal Temple attempted to fight back against the Sixth House, but suffered numerous defeats, and lost artifacts. Ordinator Feril Salmyn aimed to discover the location of Kogoruhn, but was killed there while wearing the Hair Shirt of Saint Aralor.[22][23] The Cleaver of St. Felms would also be lost by a Buoyant Armiger at the Sixth House base of Tureynulal.[24][25] Another Buoyant Armiger would lose the Crosier of St. Llothis in the ruins of Red Mountain itself.[26][27] The Ordinators also failed in retrieving the Robe of St. Roris from Assemanu, a Sixth House base.[28][29] The Temple did launch one successful raid on a Sixth House base, namely at Hassour.[30] The Imperial Legion was also involved in fighting the Sixth House, though their only recorded event, the raid on the shrine at Ilunibi, failed.[31]

During the journey to defeat Dagoth Ur, the Nerevarine was asked on several occasions to join Dagoth Ur and the Sixth House by the members of the House.[32][33][34] They also attempted to make the Nerevarine question the Daedric Prince Azura's prophecy.[35][36]

The Tribunal had proposed a five-step plan to defeat Dagoth Ur. First, there would be a series of aggressive raids in order to scout within the Ghostfence, with the Buoyant Armigers and Ordinators providing the Nerevarine with aid. After the scouting and raiding, there would be raids on the Heartwights of House Dagoth, while also recovering powerful enchanted items from their bodies. Having successfully done so, raids on Vemynal and Odrosal would take place to take back Sunder and Keening. At last, a main assault would take place on Red Mountain itself.[37]

The Nerevarine would work with the Blades, Ashlanders, as well as the Great Houses of Hlaalu, Redoran, and Telvanni to complete the Nerevarine Prophecies.[38] Troubles would arise in being named Hortator of each of the three Houses. House Redoran originally refused to accept the Nerevarine as Hortator due to believing him to be an Imperial spy, and Bolvyn Venim's dislike of outlanders.[39] House Telvanni was largely indifferent, but Archmagister Gothren refused to name the Nerevarine Hortator, as he believed the Nerevarine was not the true incarnate.[40] Within House Hlaalu, Orvas Dren was a follower of the Sixth House, and held the authority over two other Hlaalu Councillors, blocking the Nerevarine from easily being named Hortator.[41] After having completed all the steps, and obtaining Sunder, Keening, and Wraithguard, the Nerevarine had to face Dagoth Ur within Red Mountain itself. Here the two would originally fight, until Dagoth Ur was defeated. However, Dagoth Ur regained his lifeforce due to the power of the Heart of Lorkhan, posing a threat to the Nerevarine in the Heart Chamber. Eventually the Nerevarine would destroy the Heart of Lorkhan, and destroy Dagoth Ur and the Sixth House.[42] 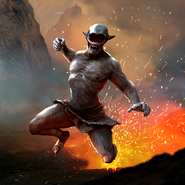 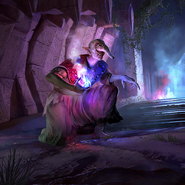 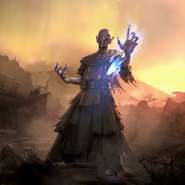 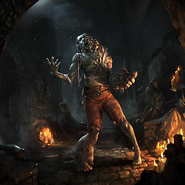 A victim of Corprus Disease. 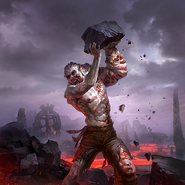 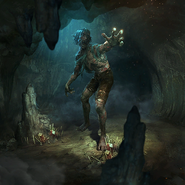 Another victim of Corprus Disease. 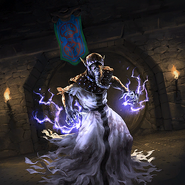 An Oathman of House Dagoth. 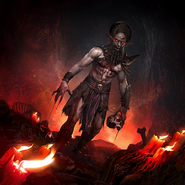 A Hand of Dagoth, implied to be Dagoth Uthol.
Add a photo to this gallery

Retrieved from "https://elderscrolls.fandom.com/wiki/House_Dagoth?oldid=3155540"
*Disclosure: Some of the links above are affiliate links, meaning, at no additional cost to you, Fandom will earn a commission if you click through and make a purchase. Community content is available under CC-BY-SA unless otherwise noted.