"A Redoran is a warrior whose duty is first to the Tribunal, second to House Redoran, and third to family and clan."
―Motto of House Redoran[src]

Upon achieving the rank of Councilman, members of House Redoran are rewarded with a Redoran Master Helm,[5] which are worn for rituals and public appearance.[6]

When House Redoran was founded is unknown. What is known that, since its founding, they have deeply cared for duty, gravity, and piety. The Redoran do not believe that a soft life is a life which is worth living. The House focuses itself on preserving the cultural traditions of the civilized Dunmer, and holding fast to the way of the warrior. Because of the latter, the military of House Redoran generally outperforms the militaries of the other Great Houses,[7] with House Hlaalu itself acknowledging as such.[8] Its warriors are stated to be humorless, but also greedy, making them potential targets for corruption.[9] In terms of mercenaries, House Redoran relies mainly on Nords and Altmer to aid their cause.[10]

The driving goal of the Redoran is fulfilling their duty and maintaining their honor, anything less is seen as disrespect to not only the person themselves, but also House Redoran as a whole. Their duty is to personal honor, family, and clan.[7] Ironically, while the Redoran themselves are not fond of Imperial organizations, the Imperial Cult respects House Redoran for its high moral principles.[11]

By the customs of House Redoran, killing is permitted in war, self-defense, defense of property, affairs of honor, and during House Wars. Any other form of killing is considered to be foul murder.[12] Justified but unnecessary or cruel killings considered a scandal, and can result in the Redoran member being sanctioned or expelled from the Great House. Opponents who yield may not be slain by members of House Redoran.[13]

When the Tribunal Temple was still in place in Morrowind, the Redoran held a close relationship with it. They supplied the Buoyant Armigers with Dunmer to fill their ranks, serving the lord Vivec in doing so.[15]

During the War of the First Council, House Redoran, alongside the other Great Houses, fought against the combined forces of House Dagoth and the Dwemer, alongside their Orcish and Nord supporters. House Redoran originally suffered greatly during this war, as these forces occupied a large portion of their territory. A counterattack was planned and executed under the command of Lord Indoril Nerevar, who successfully united the Great Houses to defeat their enemies.[18]

Aside from their participation in the Ebonheart Pact, during which they proclaimed themselves the main figures of the Pact military,[9] House Redoran has not performed a lot during the Second Era, with the exception of Tiber Septim's invasion of Morrowind.

During the invasion, House Redoran, alongside the Indoril and Dres, aimed to completely oppose the Legion invasion. When the Legions approached the Redoran cities of Kragenmoor, Blacklight, Cormar View and Silgrad Tower, the defenses of these locations were poor. Only local militia, supported by Redoran mercenaries, some Buoyant Armigers and Ordinators, were meant to hold back the invading Legionnaires. Indoril and Dres proposed that, rather than face the Legions in the field, they would wage a guerrilla war. Due to House Hlaalu supporting a peaceful integration into the Empire, House Redoran faced the reality of standing alone against the Legion forces. Shortly after this, Vivec had arranged a treaty with the Empire, which would provide Morrowind with the means to keep most of their own customs while being a part of the Empire. Whereas the Indoril and Dres still opposed this, House Redoran was grateful for an excuse to avoid fighting the Legions in the field. Because of this, House Hlaalu and House Redoran both supported joining the Empire, and House Telvanni followed suit. Not long afterwards, the treaty was made official, and Morrowind became a part of the Empire.[19]

During the late-Third Era, Morrowind was ruled by a Council consisting of Five Great Houses, namely House Redoran, Hlaalu, Telvanni, Indoril, and Dres. House Redoran was one of the Great Houses with interests on Vvardenfell, and colonized the region when it was opened for settling in 3E 414.[20] On Vvardenfell, the Redoran's council seat was the city of Ald'ruhn. The Councilors had settled in the remains of a giant Emperor Crab, which they called Skar.[16] House Redoran followed the Temple's desires to prevent expansion of the other Houses in their territory. In doing so, the Redoran and the Temple alike put themselves in the danger of being exploited both militarily and economically by the interests of House Hlaalu and House Telvanni.[20] At the same time, due to the aggressive stance of House Telvanni, Redoran Mercenaries were no longer employed to defend Telvanni territory.[21]

An aggressive stance was made against House Telvanni due to their illegal settlements, with the Redoran sending out their forces in unsuccessful attempts to defeat the Telvanni. The House was also angry about House Hlaalu due to the Caldera charter, due to Caldera being traditionally Redoran territory. At the same time, people were questioning the honor of House Redoran due to a Redoran member refusing to participate in a duel.[22] The Great House did attempt to restore this reputation, by convincing the refused party to still attend the duel.[23]

Other deeds that the Great House performed during this time was fighting against worshippers of the House of Troubles,[24] smugglers,[25] bandits,[26] and mudcrabs.[27] The Great House also actively fought against Morag Tong attempts to assassinate Athyn Sarethi.[28][29] At the same time, House Hlaalu was attempting to weaken the Redoran economically by taking their share of the guar hide trade in Vivec,[30] and by attempting to get the East Empire Company to only buy Hlaalu ebony. The Hlaalu also attempted to get rid of House Redoran's sole Ebony mine on Vvardenfell.[31]

During the closing days of the Third Era, the power of the Great House was waning alongside that of House Indoril due to their refusal to change with the times. In contrast, House Dres and Hlaalu were on the rise.[35] It is unknown if House Redoran released its slaves when slavery was outlawed. However, slavery of itself was largely uncommon in House Redoran territory.[36]

During the Oblivion Crisis, House Redoran was hit hard. Their lands on mainland Morrowind were invaded by the Nords of Skyrim,[37] and, during the Daedric invasion itself, House Redoran lost the city of Ald'ruhn to the Daedric invaders.[38] Not just House Redoran, but all of Morrowind suffered during the crisis. The local defense was poor, and House Redoran took it upon itself to form up and defend the Dunmer people. House Redoran claimed that during the Oblivion Crisis the Empire had recalled its forces from Morrowind,[39] a claim which holds little evidence. The Legion garrisons in Morrowind were already too small before the crisis had started,[40] and during the crisis itself, the Legion was too focused on the provinces of the Empire,[41] being fully committed in the provinces,[42] neglecting Cyrodiil and leaving it to fend for itself.[43] The only exception being Legionnaires from Fort Swampmoth in Black Marsh, who were recalled to Cyrodiil.[37]

In 4E 1, Mistress Brara Morvayn, alongside with a group of House Redoran members, settled on Solstheim after making some arrangements with the East Empire Company.[38]

In 4E 05, the Red Mountain erupted, which heavily damaged the settlement of Raven Rock. With most of the Legion garrison at Fort Frostmoth killed by the eruption, House Redoran was permitted to bring over the Redoran Guard for guard duties in the settlement.[38] In mainland Morrowind, specifically, in Mournhold, a Redoran Councilor started relief efforts nearly instantly after the eruption. He sent soldiers, supplies, and people for the rebuilding of settlements which were hit the hardest, such as Balmora, which was rebuilt within a couple of months.[44]

On the mainland of Morrowind, the An-Xileel invaded the province. The Legion garrisons on the border were cut off by the eruption,[45] and so it fell to the Redoran army, having formed up a force over the years, to stand up against the Argonian threat. They successfully prevented the An-Xileel from completely invading Morrowind, and may have saved the Dunmer people from being exterminated.[39] The insufficient Legion forces in Morrowind during both the Oblivion Crisis and the Red Year greatly damaged the standing of House Hlaalu, who had traditionally been supportive of the Empire. With House Redoran having defended the province during both the Oblivion Crisis and the Red Year, public favor shifted to the Redoran. House Hlaalu was no longer recognized as a Great House.[39] Since then, House Redoran is the mightiest of the Great Houses, and leads the Grand Council. House Sadras took House Hlaalu's place on the Grand Council.[46] With Mournhold having been sacked by the An-Xileel, the capital of Morrowind was also moved to the city of Blacklight.[47]

House Sathil, a Dunmeri House of Solstheim, declared independence from House Indoril in 4E 16 due to the poor performace of the Great Houses within the province, as they couldn't stop the wrack of Morrowind.[48] In the same year, Skyrim offered the island of Solstheim to Morrowind,[49] and House Redoran gained authority over the town of Raven Rock. This provided the Great House with a boost to their economy, as the ebony mines of Raven Rock produced large quantities of ebony for decades to come.[50] The situation between the Hlaalu and Redoran escalated in 4E 95. Vilur Ulen of House Hlaalu had attempted to assassinate Lleril Morvayn, due to the Hlaalu believing the Redoran were primarily responsible for them losing their position on the Grand Council. The attempt was meant to signify that House Redoran was not as strong as it boasted to be, but rather, that it was vulnerable and weak. Upon further investigation, the Redoran Guard discovered that Vilur had been organizing a coup for Raven Rock. Upon having discovered this, all members involved were executed.

From 4E 130 to 4E 181, Raven Rock saw increasing problems. The Bulwark, a large wall protecting the city, had to be repaired due to it threatening to crumble. In 4E 150, an Argonian force landed on the island, aiming to do damage to it, and in 4E 170 the ebony mines dried up, with the mine being shut down completely in 4E 181.[51]

In 4E 201 the town of Raven Rock was under attack by creatures known as Ash Spawn, who were commanded by the undead General Falx Carius. House Redoran enlisted the aid of a foreigner to help them in dealing with the ash spawn.[52] Not long afterwards, House Hlaalu attempted yet again to assassinate Councilor Morvayn of House Redoran. This time making use of the Morag Tong. Through an investigation and the aid of the same foreigner, this plan was thwarted, however.[53] House Redoran is considered the most powerful Great House of Morrowind at the time.[49]

The House Redoran banner as it appears in The Elder Scrolls V: Dragonborn.

The House Redoran banner as it appears in The Elder Scrolls III: Morrowind. 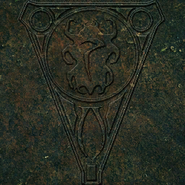 The symbol of House Redoran as it appears on the Redoran Canton in Vivec City.

Čeština Deutsch Español Français Nederlands Polski Русский Türkçe Українська
*Disclosure: Some of the links above are affiliate links, meaning, at no additional cost to you, Fandom will earn a commission if you click through and make a purchase. Community content is available under CC-BY-SA unless otherwise noted.
Advertisement