For other uses, see Howling Cave.

Howling Cave is a small cave in that contains two silver veins. It is occupied by leveled enemies, ranging from mudcrabs and rats to various undead enemies.

Upon offering up a sample of undead corpse matter, Meridia will awaken and speak to the Hero. They learn that, unlike other Daedric Princes, Meridia loathes undead and makes it the charge of her followers to destroy them whenever possible. Travel to the cave and kill the necromancers within to please Meridia. 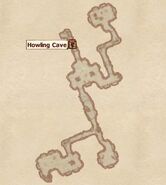 Necromancer during quest
Add a photo to this gallery

Retrieved from "https://elderscrolls.fandom.com/wiki/Howling_Cave_(Oblivion)?oldid=2984046"
*Disclosure: Some of the links above are affiliate links, meaning, at no additional cost to you, Fandom will earn a commission if you click through and make a purchase. Community content is available under CC-BY-SA unless otherwise noted.