Hunding's Rage is an item set that appears in The Elder Scrolls Online. The Vestige must have researched any six traits in the type of armor, weapon or jewelry that they wish to craft in the Hunding's Rage set.

Hunding's Rage grants the following effects depending on how many items of the set are equipped:

Weapons that take up two weapon slots; such as bows, staffs and two-handed weapons; count as two items. If more than five items of the set are equipped, the Vestige will not receive any further bonuses or effects. The Summerset chapter is required to craft jewelry of this set.

The quantitative bonuses are determined according to the Vestige's level. Once the Vestige is character level 50 with 160 champion points, the quantity will reach its maximum value. 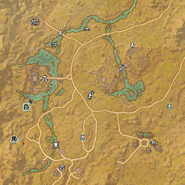 The Location of Broken Arch in Reaper's March. 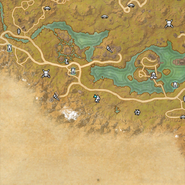 The Location of Trollslayer's Gully in The Rift.
Add a photo to this gallery

Retrieved from "https://elderscrolls.fandom.com/wiki/Hunding%27s_Rage?oldid=3084192"
*Disclosure: Some of the links above are affiliate links, meaning, at no additional cost to you, Fandom will earn a commission if you click through and make a purchase. Community content is available under CC-BY-SA unless otherwise noted.