Miscellaneous quest
Hunt and Gather is a quest available in The Elder Scrolls V: Skyrim in which the Dragonborn must find three missing items to assist Wylandriah, the court wizard of Riften in her research.

"Yes, I could use some help with that. An assistant perhaps? No, no, no. Maybe a familiar. No, too messy."
―Wylandriah[src]

Wylandriah sends the Dragonborn to find three of her missing items to help her with her current research. She reveals the location where she left them, but they do not show up on the map as quest items as they are only counted in the miscellaneous category. All of the items are inside a satchel labelled "Wylandriah's Satchel."

Each of the quest items will be found in "Wylandriah's Satchel" at the location.

"At least allow me to reward you for your uncanny foresight."
―Wylandriah[src]

Wylandriah will reward the Dragonborn with an expert-level spell tome collection, if spellcasting is of the appropriate level, as well as multiple scrolls including a Scroll of Hysteria, a Scroll of Bane of the Undead, a Scroll of Blizzard, and a Scroll of Mass Paralysis. 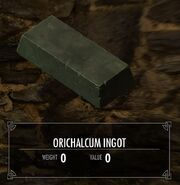 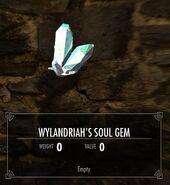 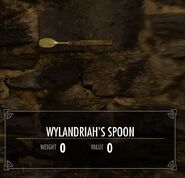