All Weapons Below Elven Rating

For other uses, see Ice Atronach.

"Golems are creatures created by those practiced in the arcane arts. They are fashioned from a material to resemble a human form, then animated and set to particular tasks, whether that be questing for an object or guarding a tomb. There are three varieties known to exist in the land: Ice, Stone, and Iron. Any of these are dangerous, each with its own special abilities, immunities, and spell casting powers. Defeating one is a feat well worth praise, for they are very formidable opponents."
―Official Arena Player's Guide.[1] 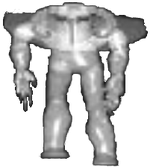 Ice golems are humanoid creatures assembled with ice, often encountered in the cold, snowy areas of Tamriel. These large titans are one of the three elemental golems, the other two being stone golem and iron golem. They are created by wizards to defend dungeons and carry other important tasks.

This elemental has the appearance of a large humanoid wearing a gray coating similar to an armor. The ice golem also has two blue horns and long nails, furthermore, it has two shades of a darker blue on the head, possibly representing eyes.

Even if the ice golems are the weakest of the three golems, these humanoids can deal worrisome level of damage, specially at low levels. Maybe it would be an obvious weakness, however there is no reference to ice golems being vulnerable to any type of Fire. The ice golem is between homonculus and its stronger cousin, the stone golem in terms of strength.

They are first seen in the Fortress of Ice, during the quest of the same name.

Notice: The following are unlicensed references. They are not copyrighted by a ZeniMax Media company, but can still be considered part of The Elder Scrolls lore and are included for completeness.
Retrieved from "https://elderscrolls.fandom.com/wiki/Ice_Golem?oldid=2979196"
*Disclosure: Some of the links above are affiliate links, meaning, at no additional cost to you, Fandom will earn a commission if you click through and make a purchase. Community content is available under CC-BY-SA unless otherwise noted.