Several (see article)
Ilunibi is a location in the Bitter Coast in The Elder Scrolls III: Morrowind.

This cave is located near Khartag Point and north of Gnaar Mok. It is used as a base for the Sixth House until the Nerevarine is sent there by Caius Cosades, during "Sixth House Base" in the main quest.

The caverns are made of many long underground tunnels, and a Sixth House shrine in the last section.

Ilunibi is divided into five sections:

Carcass of the Saint[edit | edit source]

This is the entrance section, there are waterfalls and steep rock walls. The rest of the cave is mostly flooded to about knee-deep and filled with various Ash and Corprus creatures as well as one dead adventurer. There are two exits — one to "Tainted Marrow" on the southeast and one to "Marowak's Spine" on the southwest.

This section of Ilunibi contains one dead adventurer with random equipment, several ash creatures, one leveled Daedra, and two exits to "Marowak's Spine."

"Marowak's Spine" is flooded, and contains Ash, Daedric, and undead creatures, a Dreamer, and a dead body. One exit leads back to the "Carcass of the Saint," two lead sideways to the "Tainted Marrow," and one leads onward to the next section, "Blackened Heart."

This section contains undead creatures. The entrance to the final section, "Soul's Rattle," is guarded by a random Daedric creature.

This area contains random 6th House creatures and Dreamers as well as one Daedric creature. It is the home of Dagoth Gares, a unique Ash Ghoul and keeper of this 6th House shrine, Dagoth Gares will only appear during the "Sixth House Base" quest.

It also contains many treasures, such as scrolls and chests with gold and jewels. But the real treasure are the Fists of Randagulf found behind the most eastern trough in Dagoth Gares' room. 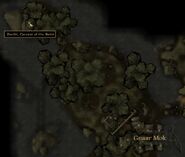 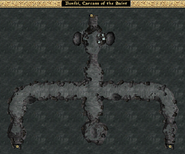 Carcass of the Saint local map 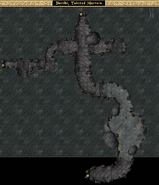 Soul's Rattle local map
Add a photo to this gallery

Retrieved from "https://elderscrolls.fandom.com/wiki/Ilunibi?oldid=3093979"
*Disclosure: Some of the links above are affiliate links, meaning, at no additional cost to you, Fandom will earn a commission if you click through and make a purchase. Community content is available under CC-BY-SA unless otherwise noted.