"At the center of Cyrodiil, the three Alliances compete against daedric overlords and each other for control over the Imperial City and access to the White Gold Tower."
―Loading Screen[src]

The Imperial City is a PvP zone, and the capital city of the province of Cyrodiil. It is added by the Imperial City expansion pack for The Elder Scrolls Online. The Ebonheart Pact, the Daggerfall Covenant, and the Aldmeri Dominion battle against each other, against the Daedra of Coldharbour and against the Imperials as they fight for control of the city and the Ruby Throne.[1]

The Imperial City is located on City Isle in the center of Cyrodiil and contains 6 explorable districts on the surface, and a massive multi-level underground network of caves, tunnels and sewers. It is a huge zone and PvP will happen constantly. There are 3 group dungeons in the city—2 PvE dungeons and 1 PvP dungeon. They are the White-Gold Tower (PvE), the Imperial City Prison (PvE) and The Imperial Sewers (PvP).

The Imperial City was released for a price of 2500

(Crowns) on August 31st for PC/Mac players, September 15th for Xbox One players and September 16th for PS4 players.

The Imperial City was built countless millennia ago by the Wild Elves of Cyrodiil, and is heralded as one of their greatest constructions. The Imperial City has historically been the center of each Empire and is sometimes known as "The Capital of Tamriel." The famed Ruby Throne has been the seat of hundreds of emperors, empresses and potentates ever since it was constructed, but the last "true" Emperor to sit on the throne was Reman III, who died at the end of the First Era leaving no heirs, and instead, the Potentates ruled the Empire in his stead until the Last Potentate, Savirien-Chorak, was assassinated in 2E 430, plunging Tamriel into chaos.

The Planemeld began in the Imperial City in 2E 578 when the necromancer Mannimarco tricked the then-Emperor Varen Aquilarios into using the Amulet of Kings with the promise of legitimizing his claim to the throne and becoming Dragonborn. However, it was a trap; the ritual tore the veil between Nirn and Oblivion and caused the Soulburst to occur. A Dark Anchor deployed over the White-Gold Tower and hundreds of Daedra poured out to initiate the invasion of Tamriel. The city was quickly overrun and captured by Molag Bal's forces, and it eventually became their main base of operations in Tamriel. The Imperials led a resistance against the Daedra, but there was no hope for the civilians still trapped in the city. The city was completely corrupted, with thousands of Daedra inside, but the Imperials continue to stand their ground even today.

The Imperial City contains six districts on the surface.

While PvP is enabled at all times in all locations (save for a few safe rooms), there are many PvE activities in the Imperial City, too. It contains many quests, daily quests, achievements, Skyshards, treasure maps, bosses and many other such activities. There is a colossal, underground network of tunnels and other areas beneath the city, which is larger than the city itself. Many Daedra patrol this network, but other players from other alliances roam the tunnels, too.

Anyone can enter the city, regardless of their campaign and keep ownership status.

Each faction has a base camp in the city's huge sewer network, which may be accessed through 3 different tunnels on the shores of Lake Rumare—one south of Chalman Keep, one west-northwest of Castle Alessia and one east of Fort Ash. It is in your base camp that you will be briefed on the conflict going on topside, and you can also receive PvE and PvP missions from the base camp which will task you to go to various areas and do certain tasks. The main questline in the Imperial City can also be started from the base camp. Enemy players cannot enter your faction's base camp, and players will be able to resupply, access their banks, guild banks, sell their items and get ready for battle.

Imperial City in the distance.

The Imperial City in The Arrival cinematic trailer 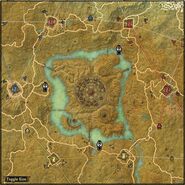 Map of the city in Imperial City.
Add a photo to this gallery

Retrieved from "https://elderscrolls.fandom.com/wiki/Imperial_City_(Online)?oldid=3118707"
*Disclosure: Some of the links above are affiliate links, meaning, at no additional cost to you, Fandom will earn a commission if you click through and make a purchase. Community content is available under CC-BY-SA unless otherwise noted.