"The passages here were once used by Tharn to hide treasures he had stolen from the Emperor's coffers."
―Ria Silmane[src]

The sewers were an non-extensive one-floor network. Despite being labeled as the "Imperial Dungeons," there's only one holding cell, the rest of the location more fitting a sewer system.

The sewers were infested with "vile rats and goblins,"[2] among other creatures which inhabit the small passages and rooms. Many of the halls contained valuables, leading from gold to armor and weapons, which Jagar Tharn stole from the emperor's coffers before usurping the Imperial throne.

Not well maintained, the sewers' mass infestation of animals made them dangerous. Many niches were carved within the walls, acting as safe haven from the fetid breezes and animals. Green moss and slime protruded from the walls, and drippings of water and other material leaked through the ceilings and floors.

During the early stages of the Imperial Simulacrum, the Eternal Champion was imprisoned by Tharn after receiving a blow to the back of the head from one of his servants.[1] The Champion eventually escaped with the assistance of Ria Silmane.[3]

The first main quest of Arena. After being imprisoned by Jagar Tharn, the ghost of Ria Silmane speaks with the Eternal Champion on their current situation. Achieving freedom, the Champion starts their decade-long journey to reforge the Staff of Chaos. 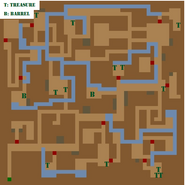 An annotated map of the dungeons.

A niche, west from the prison cell.

A treasure pile in front of the prison cell.

The Shift Gate created by Silmane at the exit of the dungeons.

Español Français
*Disclosure: Some of the links above are affiliate links, meaning, at no additional cost to you, Fandom will earn a commission if you click through and make a purchase. Community content is available under CC-BY-SA unless otherwise noted.