For other uses, see Imperial Palace.

"Be warned, once inside Tharn will throw the full might of the Palace Guards and those creatures made to resemble the Imperial Guard against you. They are but puppets of Tharn's machinations. [...] Tharn, in his fear, has made the Imperial Palace inaccessible."
―Ria Silmane[src]

Imperial Palace is the tenth and final main quest of The Elder Scrolls: Arena. In this quest, the Champion uses the Staff of Chaos to defeat Jagar Tharn and free Emperor Uriel Septim VII.

" I had expected that with all eight pieces together, the Staff of Chaos would activate and free the Emperor. None of this has occurred, and I finally know why.

Held by Tharn is a gem of the rarest qualities. Legend has that it is a star fallen from the sky, for it glows with an inner flame. This is the Jewel of Fire, and the crucible of Tharn's life force. It is also the thing in which Tharn has suffused all of the energy of the Staff. If you can touch the Staff to this Jewel, the release of that combined energy may be enough to destroy the Staff of Chaos and open the gate between worlds. If you are successful, Tharn will no doubt be destroyed as well.

There is only one way to get this Jewel.

You must make your way into the Imperial Palace and find wherever Tharn has hidden it. Be warned, once inside Tharn will throw the full might of the Palace Guards and those creatures made to resemble the Imperial Guard against you. They are but puppets of Tharn's machinations. Have mercy on them, for they know not what they serve. With Tharn, however, such care need not be taken. If you are successful a dimensional door should open, freeing the Emperor. With the Jewel drained of energy Tharn should also perish.

There is a problem however with this course of action. Tharn, in his fear, has made the Imperial Palace inaccessible. If you have been there you already know the Guards are under orders to turn all who approach back. I think that I can circumvent this with a Spell of Altering but it will mean the last of the energy holding me in this form. I will gladly sacrifice myself however, so that Tharn can pay for his betrayal.

The spell I cast will alter other's perceptions of your appearance. The Guards posted outside the Imperial Palace should be fooled and allow you entry. I only hope it will be enough. You have done more than a hero could be asked. This is the final step of a long journey. Take heart and go forward with my blessings. I thank you, in the Emperor's name."
―Ria Silmane[src]

Once the Eternal Champion obtained the last piece of the Staff of Chaos in Dagoth-Ur, the ethereal Ria Silmane will contact them again and explain why the completed artifact is not working. She thought that repairing the Staff of Chaos would be sufficient to save the Emperor from the dimension where he was sent by Jagar Tharn, however the Imperial Wizard retained the magical potential of the Staff inside a rare gem before splitting it. This gem, called the Jewel of Fire, is said to be a star fallen from the sky. Ria Silmane says the only way to defeat her treacherous old master is to rejoin the Staff of Chaos with its power inside the Jewel of Fire. This would not only open the portal to the dimension where the Emperor remains, but also destroy Jagar Tharn once his life force is also stored inside that gem.

The deceased mage explains that the Eternal Champion will have to face Jagar Tharn in person to finish his quest; this means traveling to the Imperial City and defeating Tharn inside the Imperial Palace. However, the usurper, in his fear, ordered the guards to prevent anyone from entering the Palace. Ria Silmane will sacrifice her last amount of energy holding her in ethereal form to cast a spell on the guards, making them let the Eternal Champion enter the place.

Ria Silmane remembers the Eternal Champion that he achieved extraordinary accomplishments during his journey, which is about to end very soon. She gives her long-time companion a last goodbye and thanks them for all they have done.

The Imperial City is the capital of the Empire. It has a different design from all the other cities and settlements, and seems to be handmade, and not randomly generated like cities in the rest of the provinces.

Before entering the Imperial Palace, the Eternal Champion can obtain equipment in the various shops of the city. In order to calmly explore the Palace, it is imperative to be well prepared (some recommended items can be verified in the next section).

"I have watched as you blundered your way to this place. At one time I even considered approaching you with an offer to lead my Imperial Guards, but it is plain that you are not worthy of such a position. Be not fooled by what you would call success in your journey across the Empire, for you have never faced a being as powerful as I. Your death shall be slow and torturous, a suffering that shall span the millenium. Come, I await you in the dungeons below..."
―Jagar Tharn[src]

As the Eternal Champion enters the Imperial Palace, the usurper Jagar Tharn appears as the Emperor, quickly transforming himself into his true identity. He gives a last warning to his opponent—to not be fooled by their achievements, for they had never faced a being as powerful as him. The Imperial Wizard awaits in the depths of the dungeon.

The Imperial Palace is the last dungeon in the main quest of The Elder Scrolls: Arena, and probably the hardest. The four levels which compose the Palace are medium-sized, however some of the most dangerous creatures in the game are encountered in these areas, specially the Third and Fourth Levels, where legions of Liches are clashed.

Inside the Imperial Palace it is possible to encounter Wraiths, Knights (who are not creatures), Fire Daemons, Iron Golem, Homonculi, Vampires, and Liches.

The First Level is mainly composed by the entrance to the Palace, the Main Room where the Ruby Throne is encountered and sleep rooms. This zone should not be dangerous at this point of the Main Quest, considering that only average opponents are encountered,—such as Wraiths and Knights—with the exception of Fire Daemons, who should still be dangerous.

Using the third entrance described will reveal a much shorter way to reach the Third and Fourth Levels.

The Second Level is also a medium-sized area, however it is a bit more complex than the First. In this level there will be Vampires and Iron Golems, so caution is recommended, especially with the first one.

At this level the situation becomes harder, with Homonculi being constantly encountered in the corridors. This level is, however, less complex than the Second because both entrances to the Fourth Level are located close to each other.

The two doors to the Fourth Level are located in the east, the northern entrance is easier to be reached however the southern will provide a more safe place inside the Fourth Level.

The Fourth Level is the final zone of the Imperial Palace, and it is indeed the most dangerous place in The Elder Scrolls: Arena. Legions of Liches will be encountered in the way to Jagar Tharn. Without being cautious, the Eternal Champion will be easily defeated by these undead.

The northern door directs the Eternal Champion to a seemingly blocked corridor, however the two walls blocking the way are "false," which means they can be walked through. In this little corridor there will be a Lich behind the fake wall which can surprise the unwary. The southern door will direct the Eternal Champion to a safer position inside the last zone, however Liches still will be encountered.

Jagar Tharn is inside a platform surrounded by lava on the center of the dungeon. To reach the platform it is necessary to walk around the unbreakable walls surrounding the lava and open the door in the end of the corridor. However, if the Eternal Champion makes use of the effect Passwall, they can break the way located in the southern zone, which is not blocked by unbreakable walls.

The central platform is surrounded by a lava lake and Liches will be above minor platforms connected to the walls. The Eternal Champion must use the effect Levitation to reach the main platform where the Imperial Wizard will be standing together with the Jewel of Fire.

The central platform has four cells, each one located in the corners of the ground. The Jewel of Fire is located inside the locked northeastern cell. Fortunately, the Mithril Key can be found remaining inside the northwestern cell, which is also locked but can be opened by simply attacking its door (the Mithril Key is represented by a white marker and the Jewel of Fire is represented by a yellow marker in the map on the right).

Fighting Jagar Tharn is actually completely optional, but doing so will give a great amount of experience points. The Imperial Wizard disposes of powerful spells such as Wizard's Fire, Ice Bolt, Wyvern's Sting, Lightning, and Far Silence. He has 500 points of Health and 300 Spellpoints. He can deal a moderate damage of 10–25 points in melee and can see invisible characters. Tharn also seems to be immune to any weapon - the only realiable way to hurt him is with your bare fists. After having his Health depleted, the Imperial Wizard will protect himself inside a magical shield, making him invulnerable to almost any attack — but it will not save him from the Staff of Chaos.

The Eternal Champion must open the cell where the Jewel of Fire remains and touch the gem. This will active the final scene of the game.

"You must not! The Jewel holds my lifeforce!!!"
―Jagar Tharn[src]

As the Eternal Champion throws the Staff of Chaos in the Jewel of Fire, a great light consumes the room, opening a portal to the dimension where the Jagar Tharn imprisoned the Emperor.

The Imperial Wizard shouts, desperate and in vain, telling the Eternal Champion to not do that. In seconds, the usurper is consumed by fire and becomes ash. The true Emperor Uriel Septim VII emerges from the portal and talks with his savior, finally rewarding them with the title of Eternal Champion.

"Thou art a true child of the Empire. I thank thee for thy assistance. I have a particular idea as to the question of your service in mind... From this day forth, thou art named Eternal Champion. From thy hand shall be dealt the needs of the Empire. I, Uriel Septim, true Emperor of Tamriel do decree, and thus make law. Arise my Champion, and take thy rightful place at my side..."
―Uriel Septim VII[src]

The game then congratulates the Eternal Champion for finishing the Main Quest.

"You have proven yourself a worthy champion of the Empire, and such service shall not be easily forgotten. Hang not your sword above the mantle, not place your spellbook upon the shelves. Many such adventures still await your hand. This was but a chapter in the story of the Elder Scrolls..."
―The Elder Scrolls: Arena[src]

Tharn encased in his shield.

The Staff of Chaos and the Jewel of Fire. 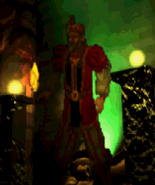 Final screen.
Add a photo to this gallery

Retrieved from "https://elderscrolls.fandom.com/wiki/Imperial_Palace_(Quest)?oldid=3098833"
*Disclosure: Some of the links above are affiliate links, meaning, at no additional cost to you, Fandom will earn a commission if you click through and make a purchase. Community content is available under CC-BY-SA unless otherwise noted.