For other uses, see Imperials.

. Unaligned outcasts of their own province of Cyrodiil, rogue Imperials have joined the Ebonheart Pact, the Daggerfall Covenant, and the Aldmeri Dominion, after breaking away from their Daedra-worshipping leaders.

Imperials have a unique racial skill line and the automatic ability to cosmetically craft items in the Imperial style.

Promotional screenshot of an Imperial in Imperial heavy armor.

Promotion screenshot of an Imperial soldier. 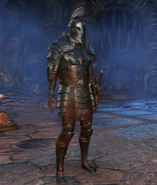 Čeština Deutsch Español Suomi Русский
*Disclosure: Some of the links above are affiliate links, meaning, at no additional cost to you, Fandom will earn a commission if you click through and make a purchase. Community content is available under CC-BY-SA unless otherwise noted.
Advertisement