"They say "the Green" is in his blood, but most things that man does, I just don't understand."
―Bodring[src]

Indaenir is a Bosmer residing in Greenshade, Valenwood. He works with the Vestige to fight against the corruption caused by the Servant of Naemon. He later becomes The Silvenar after sacrificing himself to save the Heart of Valenwood.

No one really knows where he came from. Stories suggest that he was either from Bramblebreach or Woodhearth. Another rumour is that he was raised by "an old Graht Oak, cradled in its roots, weaned on the dew from its leaves."[1]

An undead army surges through Driladan Pass and assaults Marbruk on the command of the Shade of Prince Naemon.

The Shade of Prince Naemon is spreading corruption across Greenshade. The Vestige must help Indaenir cleanse the corruption.

The Blight of the BosmerEdit

Indaenir sacrifices himself to save the Heart of Valenwood, and is brought back to life by Y'ffre as the Silvenar. 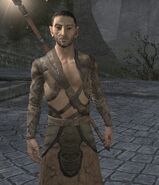 Retrieved from "https://elderscrolls.fandom.com/wiki/Indaenir?oldid=3037173"
*Disclosure: Some of the links above are affiliate links, meaning, at no additional cost to you, Fandom will earn a commission if you click through and make a purchase. Community content is available under CC-BY-SA unless otherwise noted.