It is located west of Windhelm and south of Yorgrim Overlook, and is the location of the Thieves Guild quest "Blindsighted."

The Dragonborn cannot gain entry to the ruin before starting this quest (See Dungeon Lock Outs). Approaching northeast from Shearpoint allows entrance by descending from the mountains, and, if carried out correctly, can lead the Dragonborn immediately to the Bandit Chief, avoiding the other enemies.

In the courtyard of the ruin there are five bandits and a chest. All but one of the entrances to the interior of the ruin have collapsed. Internally, Irkngthand harbours the only known statue of a Snow Elf, before the betrayal by the Dwemer caused them to degenerate into the vengeful Falmer.

Due to the high numbers of Falmer, Chaurus and other undesirables which inhabit the ruin, Irkngthand is one of the most difficult Dwemer sites to explore, although a high Sneak skill can prevent conflict within several areas, notably the Irkngthand Slave Pens, in which it is possible to sneak through the entire section without engaging a single enemy.

After the Dragonborn becomes a Nightingale, they are tasked with meeting Karliah and Brynjolf at Irkngthand in order to team up and stop Mercer from stealing the Eyes of the Falmer and from keeping the Skeleton Key.

The trio delves deep into the ruins, until they find Mercer taking the legendary Eyes from an ancient Snow Elf statue in a large hall. The room's ceiling begins to collapse, and, after defeating Mercer and taking back the artifacts, the Nightingales escape by taking advantage of the water flooding the room and swimming into a clearing, and out of the ruins, emerging in Bronze Water Cave.

For an alchemist, Irkngthand features a treasure trove of alchemical ingredients. As with any Dwemer ruin, it is possible to loot Dwarven Oil from the remains of automatons, whilst Falmer often drop Falmer Ears, and occasionally other alchemical ingredients. Additionally, the existence of Chaurus within the ruins provides Chaurus eggs and Chaurus Hunter Antennae, and Skeever Tails, Charred Skeever Hide and Spider Eggs can also be obtained. 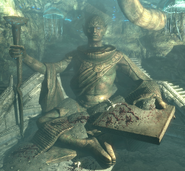 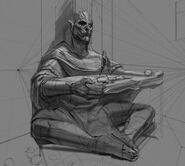 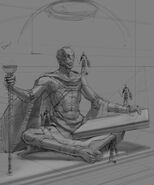 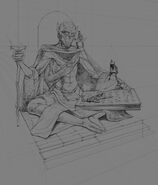 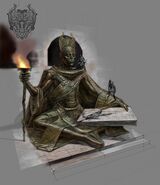 Retrieved from "https://elderscrolls.fandom.com/wiki/Irkngthand?oldid=3121003"
*Disclosure: Some of the links above are affiliate links, meaning, at no additional cost to you, Fandom will earn a commission if you click through and make a purchase. Community content is available under CC-BY-SA unless otherwise noted.