Immune to non-enchanted weapons below Mithril

For other uses, see Iron Atronach.

"Golems are creatures created by those practiced in the arcane arts. They are fashioned from a material to resemble a human form, then animated and set to particular tasks, whether that be questing for an object or guarding a tomb. There are three varieties known to exist in the land: Ice, Stone, and Iron. Any of these are dangerous, each with its own special abilities, immunities, and spell casting powers. Defeating one is a feat well worth praise, for they are very formidable opponents."
―Official Arena Player's Guide.[1] 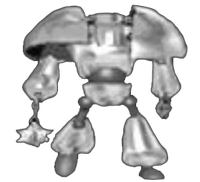 Iron Golems are humanoid creatures assembled with iron, often encountered inside high level quests. These large titans are one of the three elemental Golems, the other two being Ice Golem and Stone Golem. They are created by wizards to defend dungeons, ruins and carry other important tasks.

This elemental has the appearance of a great humanoid composed with large metal plates, highlighting the giant shoulders. The Golem's head is attached to two long horns and has a red shade representing eyes.

The Iron Golem is the strongest of the three elementals, having more Health and strength (in both meanings, power and attribute). Furthermore, the Iron Golem is the only elemental which can be considered a member of the most dangerous creatures in the game, along with Fire Daemons, Medusas, Vampires and Liches.

This creature is indeed a dangerous opponent, especially during its early appearances, the Iron Golem has a large amount of Health, besides its immunity to non-enchanted weapons below Mithril.

They are first seen in Labyrinthian, during the quest of the same name.

Retrieved from "https://elderscrolls.fandom.com/wiki/Iron_Golem?oldid=3077314"
*Disclosure: Some of the links above are affiliate links, meaning, at no additional cost to you, Fandom will earn a commission if you click through and make a purchase. Community content is available under CC-BY-SA unless otherwise noted.