Ironscale Dragon is a creature card in The Elder Scrolls: Legends added with the Heroes of Skyrim expansion.

Ironscale Dragon can be purchased as part of the Alduin's Apocalypse deck or purchased alone for 50 soul gems.

Due to Ironscale Dragon's regenerate ability, it should be used to attack and destroy many creatures on the field. Since it has very high damage and health stats, it can kill some of the strongest creatures in the game and continue to fight on. A good strategy to use is for Ironscale Dragon to kill every new creature summoned by the opponent while the rest of the player's creatures attack the opponent. 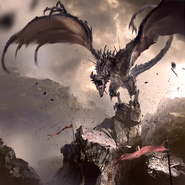 Retrieved from "https://elderscrolls.fandom.com/wiki/Ironscale_Dragon?oldid=3005057"
*Disclosure: Some of the links above are affiliate links, meaning, at no additional cost to you, Fandom will earn a commission if you click through and make a purchase. Community content is available under CC-BY-SA unless otherwise noted.