Restless League
Iszara is a Redguard and Cyrus' older sister.

Iszara was born in Sentinel and was the older sister of Cyrus. In 2E 852 she attended a play with her brother, which featured the actor Hakan. Hakan and Izsara soon fell in love and married later the same year. Izsara told Cyrus that Hakan was a wonderful husband, but at times he was often away busy with political matters or training with the Forebears.

In 2E 854, her father wrote a play in the night about the ancient Ra Gada from Yokuda defeating the Orcs of Hammerfell to claim the land for their High King. This play was an attempt to solve the conflict between the two factions. The play was a huge success, and a celebration party was held in a local tavern after it finished where both Crowns and Forebears attended in equal numbers.

Hakan was not impressed by this play, and in his drunken state, Hakan challenged the also drunken Cyrus in sword combat. Iszara pleaded Hakan to stop, to which he responded Iszara with a slap to the face. They fought and Cyrus emerged the victor, lunging a blow right in Hakan's chest. Following that event Cyrus ran away, leaving Iszara heartbroken.

In 2E 864, Cyrus met with S'rathra in Wayrest where he is given a letter written by his old friend, Tobias. The letter states that no one had seen Iszara in three months, giving Cyrus incentive to travel to Stros M'kai, where she was last seen, to find her. 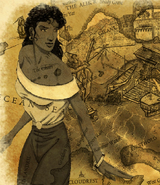 From loading screen.
Add a photo to this gallery

Retrieved from "https://elderscrolls.fandom.com/wiki/Iszara?oldid=3137576"
*Disclosure: Some of the links above are affiliate links, meaning, at no additional cost to you, Fandom will earn a commission if you click through and make a purchase. Community content is available under CC-BY-SA unless otherwise noted.