For other uses, see Jauffre.

"Yes, Baurus told you right. I am the Grandmaster of the Blades. We serve the Emperor and the Septim bloodline. Talos is our patron."
―Jauffre[src]


Jauffre is a Breton Blade residing in the Weynon House, within the Weynon Priory. He is the grandmaster of the Blades. 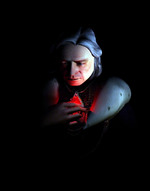 Having continuously proven a valuable asset to the Blades, he soon was promoted to Captain of the Palace Squadron, a group of Blades charged with the security of the Emperor within the walls of White-Gold Tower. As a captain of the Blades, he was the main guardian and became a trusted friend of Emperor Uriel Septim VII.

One night, Uriel asked for Jauffre's presence in his chambers. As Jauffre entered the room, a small basket caught his attention, for inside lay a baby boy. At once Jauffre knew that the boy was the son of the Emperor, yet an illegitimate heir to the throne. Uriel ordered Jauffre to take the boy, Martin, to a secret location where he could grow up free from the machinations of the palace. Jauffre took upon this task unquestioningly and left the basket on the doorstep of a farmer whom he deemed appropriate. Over the course of the following years, Uriel would ask about the boy's progress from time to time.

Eventually, Jauffre was promoted to Grandmaster of the Blades. As he became older, Jauffre retired to live as a monk in Weynon Priory.

"We are honored to have Grandmaster Jauffre, or Brother Jauffre as he prefers, as a resident here."
―Brother Piner[src]

Jauffre was very dedicated to Uriel Septim VII and to the Empire. He held some disdain for the Elder Council, stating that they had no power over him or the other Blades members. He held the safety and regard of the land above all else and would do anything to see Tamriel free from the hordes of Oblivion. Despite his age, Jauffre was also an exceptional fighter, possessing skills akin to that of a master warrior. Wielding an Akaviri Dai-Katana and specializing in both heavy armor and magic, Jauffre is more than an average fighter capable of fighting the toughest of opponents.

Jauffre acts as a mentor to Martin and the Hero throughout the crisis and did whatever he could in the way of guidance so that the two could ultimately stop the forces of Oblivion. In the end, he was deemed a hero.

Several years later, in 3E 433, Uriel Septim was assassinated in the secret escape route out of the Imperial City. Upon learning this, Jauffre despaired until the Hero of Kvatch brought the Amulet of Kings to him. At first, Jauffre assumed the only way for the Hero to have the amulet would be if he had played a part in the murder of the Emperor, but as the Hero conveyed Uriel Septim's last words, Jauffre understood that such message could only come from the deceased ruler. Eventually, Jauffre told the Hero of Martin's whereabouts: Martin was a Priest of Akatosh in the city of Kvatch. The Hero was to travel to Kvatch and bring Martin back safely so they could seek refuge within the walls of the Blade's headquarters of Cloud Ruler Temple, and trace a plan of action to overturn the Mythic Dawn.

While the Hero was away, the Priory came under attack. Mythic Dawn assassins rushed in and attempted to kill Jauffre, who was alerted to their presence by a fellow monk's scream. Jauffre managed to defend himself and met with the Hero and a young man, who had just arrived at the Priory. Together they took care of the remaining assassins and rushed to Jauffre's study, only to find that the Amulet of Kings had been stolen. He had almost given up hope when he recognized the young man brought by the Hero as Martin, and decided to leave for Cloud Ruler Temple immediately as to ensure Martin's safety.

At Cloud Ruler Temple in northern Cyrodiil, Jauffre presented Martin to the Blades and recruited the Hero of Kvatch as a Knight Brother of the Blades. Several days later, he dispatched the Hero to meet with Baurus in the Imperial City. After the Hero had returned Jauffre sent him to kill some Mythic Dawn spies and close an Oblivion gate outside of Bruma. Jauffre would also take an integral part in making sure Martin was protected and that every effort against the Mythic Dawn was attended too.

Jauffre would then be one of the chief defenders in the Second Battle of Bruma alongside Baurus, Martin and the Hero, fighting bravely and fiercely despite his old age until the Hero would manage to close the Great Gate and claim victory for the battle. Jauffre then expresses joy at the victory, but also notes that the crisis is not yet over.

Despite their best efforts the forces of destruction launch one final, massive assault on the Imperial City. Jauffre would take up the defense and fight once more alongside Martin, Baurus and the Hero and the group fought their way through the Imperial City. While Jauffre and Baurus fought off the hordes of Daedra, Martin and the Hero then entered the Temple of the One and saw the end of the forces of Oblivion and Mehrunes Dagon.

Jauffre arrived alongside Baurus and High Chancellor Ocato to congratulate Martin and the Hero only to discover that Martin sacrificed himself in order to defeat Mehrunes Dagon and seal the portals to Oblivion forever. He would personally congratulate the Hero and note that he was more a Champion of Tamriel than just Champion of Cyrodiil.

After the Crisis[edit | edit source]

Jauffre and Baurus would return to Cloud Ruler Temple where he stated gave him some sense of certainty in such uncertain times. He also notes that Martin was probably the greatest emperor who ever lived, perhaps even rivaling Tiber Septim himself. His fate after these events is unknown other than that he remained as the Grandmaster of the Blades and would see them in their future as they return to their ancient role until the next Dragonborn arises.

Cyrus: "Grandmaster, is this ... ?"
Jauffre: "Yes, Cyrus. This is the Emperor's son. Martin Septim."
Cyrus: "My lord! Welcome to Cloud Ruler Temple! We have not had the honor of an Emperor's visit in in many years!"
Martin: "Ah, well, thank you! The honor is mine."
Jauffre: "Come. Your Blades are waiting to greet you."

Jauffre: "With all due respect, sire, there must be another way. The risk is too great!"
Martin Septim: "I know the risk. I was at Kvatch. But there is no other way. We have no choice."
Jauffre: "The Countess will never agree to it..."
Martin Septim: "She will. She must."
Jauffre: "Very well. The Blades are, as always, at your disposal."

Retrieved from "https://elderscrolls.fandom.com/wiki/Jauffre_(Oblivion)?oldid=3111088"
*Disclosure: Some of the links above are affiliate links, meaning, at no additional cost to you, Fandom will earn a commission if you click through and make a purchase. Community content is available under CC-BY-SA unless otherwise noted.