For other uses, see Jazbay Grapes.

Jazbay Grapes is an ingredient in The Elder Scrolls V: Skyrim. It can be used to make potions at an alchemy lab as part of alchemy.

"There was a time when it would be considered treason to pick one of these grapes without express permission from the Emperor himself. It is my understanding that although growers in Skyrim were successful in improving the fruit's survivability, it came at the cost of flavor. No longer is it quite the prize it once was. And yet, growing amidst the volcanic tundra of Eastmarch, it is still immensely useful for concocting potions. Mages value it highly as it can be combined with simple garlic to enhance the regeneration of magicka. While no longer against the law, picking these grapes in large amounts is best kept to oneself."
―Agneta Falia[src]

A clue to finding these Jazbay Grapes is that they are commonly found on rocky terrain, often near hot springs. They grow very close to the ground and are sometimes tricky to spot. 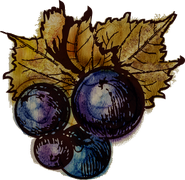 A colored sketching of Jazbay Grapes.

Deutsch Español Italiano Polski Русский
*Disclosure: Some of the links above are affiliate links, meaning, at no additional cost to you, Fandom will earn a commission if you click through and make a purchase. Community content is available under CC-BY-SA unless otherwise noted.