For other uses, see Jorunn the Skald-King.

"After dear Nurnhilde fell in battle, my brother and I threw back the invaders. Afterward, we disagreed on who should succeed our sister. I believed in diplomacy and wisdom. Fildgor believed in rule by force. I couldn't let him take the throne."
―Jorunn the Skald-King[src]

Jorunn Skald-King is the Nordic High King, leading the Ebonheart Pact against the other alliances for control of the Imperial Throne during the Second Era.

Jorunn was born in 2E 546 to Queen Mabjaarn Flame-Hair. His sister, Nurnhilde, was the eldest of the three alongside their brother Fildgor, and heir to the throne. Jorunn had great talent as a singer and studied the art on Skald's Retreat on the Isle of Gold near Riften. He learned from the most renowned bards in the Eastern lands and was dubbed "The Skald-Prince" of Skyrim.

Jorunn spent most of his young life in artistic and philosophical pursuits. He spent time in Mournhold in Morrowind, Stormhold in Black Marsh, Sutch in Cyrodiil and Elinhir in Hammerfell. It is also rumored that he visited Solitude, the capital of Western Skyrim, in disguise. Despite claiming that he had no interest in leadership and politics, the young Nord found himself becoming the leader of whatever creative community he found himself in. He received little training in the martial arts, but learned less orthodox ways of defending himself in his travels across Tamriel.

In 2E 572, Jorunn was in Riften when the Akaviri of Dir-Kamal attacked the northeast coast of Skyrim. He fought his way up the western coast with the aid of his closest friends, known as the "Pack of Bards." The Pack arrived just as the Akaviri breached the gates of Windhelm. Jorunn joined the battle in the city, but he was too late to save the city or his mother and sister.[1]

Wounded and devastated by the loss of his family, Jorunn felt the responsibility of his royal birth for the first time. He decided to appeal to the Greybeards and made his way to High Hrothgar. For unknown reasons, the Greybeards decided to forgo their doctrine of passivity and aided Jorunn by summoning a hero from Sovngarde; Wulfharth the Ash-King.

The Skald-King and the Ash-King[]

Jorunn claimed the title of Skald-King and, with the aid of Wulfharth, rallied his fellow Nords of Eastern Skyrim and raised an army from The Rift and Eastmarch, then he fortified Riften. As the Akaviri marched south from Windhelm, they found Riften too well defended by the Nords, who were inspired by the presence of Wulfharth and were eager to fight. Dir-Kamal decided these Nords were too great an enemy and turned his army east into Morrowind towards Mournhold, assuming the Nords would not pursue.

This proved a fatal error, as Jorunn led his army after the Akaviri into Morrowind. For the first time since the Battle of Red Mountain, a Nord army entered Morrowind. Dir-Kamal's army was trapped at Stonefalls and engaged in battle by Jorunn's Nords and an army of Dunmer led by the Tribunal Almalexia. The battle was undecided until a fourth army arrived on the field: a force of Argonian shellbacks led by a trio of Argonian battlemages. The Akaviri army was routed and drowned by the thousands as they were driven into the sea.

The High King of Skyrim[]

The Ash-King, having fulfilled his promise, returned to Sovngarde. Jorunn was crowned High-King of Skyrim three weeks later at the Palace of the Kings in Windhelm, though not without contention. His twin brother, Fildgor Strong-Prince, who led the Stormfist Brigade during the invasion, sought to take the throne by force. Jorunn succeeded in exiling his brother and ushered an era of peace and diplomacy across Skyrim and the newly formed Ebonheart Pact. Jorunn also had a son, Irnskar.

Jorunn was later appointed acting High King after the Great Moot, a unique form of government in which decisions must be ratified by all composite parties. He rules from the ancient city of Windhelm.

The Vestige encountered the Skald-King in Windhelm after arriving by the docks, holding council during the celebrations in a makeshift cottage in the city alongside Pact delegates and his son, Prince Irnskar. The Vestige participated in the Konunleikar festivities and helped uncover a plot by the Stormfist Brigade and stopped them from assassinating Jorunn in the Hall of Trials, at the final event of the festival.

With danger presenting itself and with the Palace of Windhelm still under construction, the king decided to hold a secret Moot with the rest of the Pact leaders at various locations in Eastmarch, with Skuldafn as the planned destination for the council.

King Jorunn, the Pact leaders and their respective retinue first moved to Fort Amol with the Pact delegates as the council continues. While within Jarl Ivannar's keep, he was poisoned by Stormfist assassins and was almost replaced and killed by a Breton assassin named Dhalen until the Vestige and the Morag Tong assassin Naryu Virian arrived and foiled the assassination attempt by the Stormfists.

Dhalen had poisoned Jorunn with a Daedric poison, and the King soon fell into a coma. The Vestige was able to procure items to prolong his life until he could be brought to the Ternion Monks at Mistwatch. There, an Argonian Dreamwalker attempted to enter the King's mind to save him. He failed, and the Vestige entered after him. They were able to defeat the nightmares and free him from the poison's influence.

Queen Nurnhilde's spirit appeared to Jorunn and told him of their brother Fildgor's plan: he intended to enter Sovngarde to be able to wear the Crown of Freydis, after which he would be the undisputed King of Skyrim. For this, Fildgor had moved his forces to Skuldafn.

Jorunn and the Moot marched on Skuldafn with a Pact army, but met heavy resistance from the Stormfists. Pact scouts were able to locate a hidden passage through the mountains that bypassed the Stormfist lines. Jorunn dispatched Mera Stormcloak and a small contigent of Pact warriors through the passage, along with the Vestige. Once at the Stormfist camp, they set the supplies and weapons on fire. With the Stormfists in chaos, the Pact broke through their lines.

The Vestige entered the portal to Sovngarde to find Fildgor performing a ritual to force the Crown of Freydis to acknowledge him. The Vestige fought and defeated him, then brought him out to face his brother. The Vestige then had to choose between killing Fildgor, letting Jorunn kill him, or sparing his life.

The Moot then convened, presenting their objects of power.

Invasion of the Rift[]

Shortly after, Reachmen invaded the Rift. Jorunn and the Moot immediately lead the Pact forces south. The Companions had already engaged the invaders at Fallowstone Hall. They stole the axe Wuuthrad from the crypts and headed west. The Reachmen were under orders from the Worm Cult, lead by a Nord necromancer named Thallik Wormfather. They shattered the axe and used its fragments to revive Sinmur, an undead giant who had been slain by Ysgramor.

Sinmur then fused his essence with Thallik and attacked Riften, killing many before heading into the mountains to the Daedric ruins of Trollhetta. There the last of the Worm Cult was besieged by Pact forces led by Jorunn. The Vestige was able to gather the fragments of Wuuthrad and use them to weaken Sinmur sufficiently to be slain. After the battle, ghosts of the Five Hundred and Ysgramor himself congratulated Jorunn on his victory.

Vanus Galerion and the Vestige were able to convince all three alliance leaders to meet on the island of Stirk of the coast of Cyrodiil to plan an invasion of Coldharbour. Negotiations quickly broke down as the three leaders began arguing with each other. Vanus and countess Hakruba of the Fighters Guild realized the leaders would never agree to sending forces into Coldharbour for fear the others would use the opportunity to seize the Imperial City. They asked the Vestige to convince the three leaders to allow the Fighters and Mages Guild to go into Coldharbour instead. Before the negotiations could resume, Molag Bal opened Daedric portals on the island and his minions attacked. After being defeated, the three leaders realised the Guilds going in would be their best plan, and each gave their blessing.

One Victor, One King[]

The Vestige is sent by Thane Mera Stormcloak to the Hall of Trials to protect King Jorunn.

A Council of Thanes[]

Convince the Thanes of Eastmarch to attend Jorunn's war council as they march against the Stormfists.

Gods Save the King[]

A Giant in Smokefrost Peaks[]

The Weight of Three Crowns[]

Jorunn was said to be down-to-earth, to have a sense of humor and an "iron will to succeed." While his brother Fildgor preferred force and power, Jorunn preferred peace and democracy, a trait which helped him keep the Pact from falling apart. While his childhood pranks and way with words as a skald has often garnered him women and admiration in the past, he now uses it to keep a volatile alliance together.

He deeply cared for his sister Nurnhilde, and she often took care of him as well, such as the time when Jorunn almost died from frost inside a cave. He is considered the weakest of his siblings especially when compared to Fildgor, but makes up for it with his diplomatic acumen and kind heart.

Considered a rare breed of ruler, he is said to be a king who listens to his people. 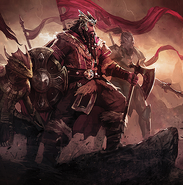 Art of Jorunn, from the Interactive Map 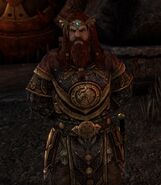 Jorunn at the Trolhetta Daedric Ruins in the Rift 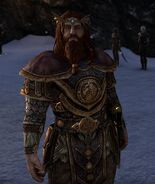 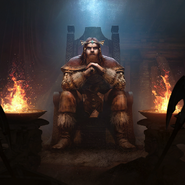 Jorunn the Skald-King in Legends

Deutsch Español Français Italiano 日本語 Nederlands Polski Русский
*Disclosure: Some of the links above are affiliate links, meaning, at no additional cost to you, Fandom will earn a commission if you click through and make a purchase. Community content is available under CC-BY-SA unless otherwise noted.
Advertisement