"Julianos says: Know the truth. Observe the law. When in doubt, seek wisdom from the wise."
―Ten Commands: Nine Divines

Julianos, the God of Wisdom and Logic, is one of the Nine Divines. To the Nords, he is known as Jhunal, father of language and mathematics. In Cyrodiil, Julianos is god of literature, law, history, and contradiction. The Elder Scrolls are kept by monastic orders dedicated to Julianos.[1]

Ten Commands: Nine Divines has Julianos instructing worshipers to "Know the truth. Observe the law. When in doubt, seek wisdom from the wise." Julianos is often worshipped by wizards, mages, and scholars alike.

In Cyrodiil, the main chapel of Julianos is located in Skingrad. Julianos also has shrines in every chapel in Cyrodiil as well as the Temple of the Divines in Skyrim. Julianos has no temple dedicated to him in Skyrim.

Julianos gives increased magicka and intelligence to his worshippers. As all blessings do, it also cures all diseases.

There is only one Wayshrine of Julianos in Cyrodiil. It is located Northeast of Chestnut Handy Stables, shore of Lake Rumare. It gives the player the Scales of Julianos blessing.

Julianos's only known artifact is the Shield of the Crusader. It was his gift to Pelinal Whitestrake when Pelinal was fighting the Ayleids. The shield was lost for some time, but it was eventually retrieved by the Knights of the Nine.[2] After the Order's collapse, Sir Henrik erected Fort Bulwark as a means of keeping the Shield safe.[3] It was eventually recovered from there by the Hero of Kvatch.[4]

"Come to me, Julianos, for without you, my wit is weak to sort the wheat from the chaff, and my eyes should neither know the true from the false, nor sense from folly, nor justice from prejudice and interest."[5] 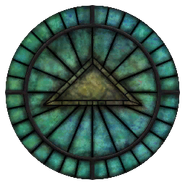 The symbol of Julianos depicted in stained glass.

Notice: The following are unlicensed references. They are not copyrighted by a ZeniMax Media company, but can still be considered part of The Elder Scrolls lore and are included for completeness.
Беларуская Čeština Deutsch Español Français Italiano Polski Português Русский
*Disclosure: Some of the links above are affiliate links, meaning, at no additional cost to you, Fandom will earn a commission if you click through and make a purchase. Community content is available under CC-BY-SA unless otherwise noted.
Advertisement