Not to be confused with Cat.

"Khajiit are commonly considered one of the beast folks, one of the few survivors of the original inhabitants of Tamriel before the coming of mer and man, and Elsweyr is their home."
―Imperial Geographic Society[src]

Khajiit are one of the ten default playable races in The Elder Scrolls. They are one of the beast races which inhabit the continent of Tamriel, primarily their home province of Elsweyr.[1] They are known for their natural agility, stealth, and their production of moon sugar, which can be refined into skooma. Khajiit differ from humans and elves not only in their skeletal form and the fur that covers their bodies, but in their metabolism and digestion as well.[2] Khajiit lifespan is similar to humans.[3] They travel around selling their wares but are not usually trusted, due to the racial prejudice of many of the races in Tamriel, resulting possibly from the belief that most Khajiit are thieves. They usually talk about themselves in the third person, such as with J'zargo and Akkhuz-ri.

The Khajiit religion, while quite different from that of men and mer, is still clearly derived from the old Aldmeri pantheon. The Khajiit creation myth includes references to powerful ancestor cats with strikingly familiar names.[4] Their legends start with the original litter mates, Ahnurr and Fadomai (Anu and Padomay). These two gave birth to all of the great spiritual children, including Alkosh the first cat (Akatosh), Khenarthi (Kynareth), Magrus (Magnus), Mara, and S'rendarr (Stendarr). A second litter of children soon followed, including Merrunz (Mehrunes Dagon), Mafala (Mephala), and Sangiin (Sanguine), among others. Ahnurr did not want further children, but Fadomai was persuaded by her elder children to birth one more litter, this final group containing Azurah (Azura), Nirni (Nirn), and the moons. At this, Ahnurr became angry at Fadomai, who fled to the void, and birthed one last child, Lorkhaj (Lorkhan). Fadomai knew she was dying, her life having been drained by her birth, but she gave to Nirni a gift, that she would birth children of her own.[5]

Nirni went to Lorkhaj, asking him to form a dwelling place for her children. This he did, but he tricked his siblings, forming the mortal plane and trapping many of them there with him. Most of Fadomai's first litter were trapped, while her second litter saw the danger and fled. Into this dwelling, Nirni birthed many children, the various human and mer races of Tamriel. However, one of Fadomai's children, Azurah, had also been given a gift by their mother. She was given permission to take one of Nirni's children, and reshape them to her own liking, so long as she made them the fastest, cleverest, and most beautiful of all creatures. Azurah chose a group of forest dwellers among Nirni's children, and from them, she formed the Khajiit. Nirni was furious at this, and asked her sibling Y'ffer to punish the Khajiit. He did this by turning their grasslands into a dry desert, and their forests into poisonous marshes. The Khajiit, however, were protected by Azurah, who taught them the secret of the moons (the Lunar Lattice in Khajiiti terms), and how to change their shapes to survive. Those forest dwellers who stayed true to their mother, Nirni, were turned into the Bosmer, and given the lush forests of Valenwood as their home.[5]

There is some speculation as to how accurate this creation myth truly is. What is known is that Khajiit were present on Tamriel when the Ayleid first explored the region, presumably long before there was any established Bosmer kingdom.[6] What is not known is how long those Khajiit were in the area, nor how many other mer expeditions landed on Tamriel prior to the Aldmeri immigration (evidence suggests at least one other mass immigration of elves to Tamriel, resulting in the Dwemer of Morrowind)[source?]. Some Imperial scholars believe the Khajiit evolved naturally from non-sapient cats, much like they believe the Argonians evolved from non-sapient lizards. Topal described the Khajiit as two and four legged cats with only primitive behaviors, and no clear signs of intelligence.[6] However, Ayleid legend tells of bartering ownership of the forests of Cyrodiil from the Khajiit in exchange for the secrets of literacy[source?], and Pelinal Whitestrake, early in the First Era, claims to have fought and killed thousands of clearly organized, sapient Khajiit warriors, believing them to be Aldmeri.[source?]

The moon is very important to the Khajiit, for the moon decides what body type they take on.[7]

The Khajiit, along with the Argonians, inhabited Tamriel long before the elves arrived (which could mean the two beast races are possibly native to Tamriel, unlike humans or mer, which migrated to Tamriel. However, some sources say life originated in Tamriel).[8][9][1] Topal the Pilot, founder of the Ayleid empire, described a primitive but intelligent race of feline humanoids inhabiting the forests around Lake Rumare when he arrived there with his expedition in the Merethic Era.[6] Eventually, the elves and humans drove the beast races into the southern extremes of Tamriel, into the forests and marshes that humans considered uninhabitable.

There are conflicting records about the relationship between the different tribes before and after their agreement to form a unified race and the foundation of Elsweyr in 2E 309 by two powerful factions.[9][7] Older studies claim that there was constant warfare between the tribes before that date, and a rebellion against the union only ended when an alternate rule, depending on the states of the moons, between the different tribes was agreed on.[7] The Pocket Guide to the Empire, Third Edition: Elsweyr disagrees with this view and instead places the time of harmony through alternate rule before the union of 2E 309, claiming it stabilized the region for thousand years. The balance was only disrupted by the Thrassian Plague, which decimated the Khajiiti population and forced them into two opposed faction, which then were united in the year 2E 309.[1] Soon after, the Cyrodilic Empire began making diplomatic overtures with Elsweyr, leading up to Tiber Septim's unification of the entire continent.[source?]

Imperial influence has chiefly been felt in the southern regions of Elsweyr, where relatively large, semi-permanent cities have sprung up along trade routes. These cities are known to move around frequently, but within a small region in the jungles near the river basins.[source?] The primary source of income in Elsweyr is their export of moon sugar, which is used to make the highly addictive drug skooma.[source?] In fact, a sizable portion of the Khajiiti southern population are "sugar tooths," slang term for a skooma addict, although they seem to be more able to function under the influence than other races.[source?] The fertile grounds near the southern rivers are also well suited for other crops, particularly saltrice, which makes up the bulk of the legal trade. The northern regions, still mostly dry grassland, have not progressed far from their tribal origins, and rarely consider themselves united in any meaningful way.[10]

The government of the Khajiit consists primarily of the Clan Mothers of each clan of tribes. These wield power mostly due to their control of moon sugar harvests, but also maintain a hereditary position of power.[source?] The nominal head of the Khajiiti religion is a unique form of Khajiit known as the Mane.[source?] Khajiit legend claims that it is only possible for one mane to live at a time, and his birth is triggered by the birth of a newborn Khajiit when the two moons have fully aligned in the sky.[source?] The Mane is apparently bipedal, and clearly has the power of speech, but does not fall into any of the defined Khajiiti subtypes: he is simply unique. While he is, in theory, a neutral, unbiased religious leader, the Mane is the true power in Elsweyr, and was ultimately responsible for the success of the attempted unification of the province in the last Second Era.[source?]

Khajiit, like Argonians, are still considered little more than beast-men by many human and mer cultures. They are not usually trusted by—mostly—the Nords, but also by people in general, as stated by Ysolda in Whiterun.[11] They were oppressed and enslaved by rich families and primary industries in Morrowind,[12] until very recently when King Helseth Hlaalu finally outlawed slavery. They also have a strong racial dislike for Argonians (one which is shared in return), which causes tension in the southern Cyrodilic cities of Leyawiin and Bravil, where Elsweyr and Black Marsh are both fairly close, and which have strong populations of both races.[13]

The settled Khajiit of southern Elsweyr are noted for their mercantile traditions and a stable agrarian aristocracy based on sugarcane and saltrice plantations. They were also quick to adopt Imperial ways. The nomadic tribal Khajiit of the north are aggressive and territorial tribal raiders who cling to their warlike barbarian tradition. They are periodically united under tribal warlords.[14]

Many Khajiit disdain weapons in favor of their natural claws. They make excellent thieves due to their natural agility and unmatched acrobatic abilities. Many Khajiit are also warriors, although this is mainly true of the Cathay and Cathay-raht, while the other breeds are quadrupedal - either muscular and extremely hardy or lithe and very agile. In addition to their native quickness, Khajiit have developed a natural proficiency in stealth, and have the added benefit of native night vision. These skills, combined with the general tendency of humans and elves to look down on them as "beasts," lead many Khajiit outside of their home province to become bandits or professional thieves and assassins, such as the hired Khajiit assassins from the Dark Brotherhood.

Many Khajiit like to adorn themselves in piercings, and interestingly after The Elder Scrolls III: Morrowind are the only race other than Argonians that still do.

Khajiit are rarely seen at sea, preferring instead to trade via land routes. If necessary they may take a boat for the purpose of the movement of skooma, however most hold little love for the ocean, viewing sailing as a grueling task.[15]

Many Khajiit names contain a prefix or suffix (e.g. Vasha). Khajiit names do not necessarily contain an apostrophe, but are most commonly written that way. Common prefixes and suffixes are shown below:[16][UL 1]

Moons and the Khajiit breeds[]

Phases of the Moons[]

Both a Khajiit's appearance and physiology depend on the Lunar Lattice of Masser and Secunda during the time of its birth.[UL 1] These appearances can vary drastically from one breed to another, with some Khajiit resembling the common house cat, other Khajiit resembling huge bipedal jaguars, and others being almost indistinguishable from Men or Mer.[7]

Within the four groups are more variants which depend on the phase of Nirn's smaller moon, Secunda. The variations due to Secunda are more subtle than the variations due to Masser. Secunda's phases determine how bestial any born Khajiit appears; during its waxing phase a Khajiit appears less bestial, while during its waning phase a Khajiit will appear more bestial.[UL 1]

In all, there are seventeen known breeds of Khajiit,[UL 1] though there are supposedly more than twenty:[7]

Different breeds of Khajiit in The Elder Scrolls Online.

A senche-tiger in The Elder Scrolls Online.

A Pahmar-raht warrior in The Elder Scrolls: Legends.

Ohmes sexes in The Elder Scrolls: Arena, with the Knight class. 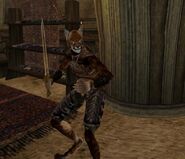 A Suthay-raht in The Elder Scrolls III: Morrowind.

A distant relative to the Alfiq breed of Khajiit.

A Dagi-raht mystic in The Elder Scrolls: Legends. 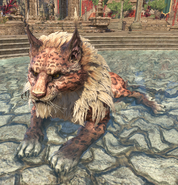 A Senche-raht in The Elder Scrolls Online.

Notice: The following are unlicensed references. They are not copyrighted by a ZeniMax Media company, but can still be considered part of The Elder Scrolls lore and are included for completeness.
Deutsch Español Suomi Français Italiano Nederlands Polski Português Русский Svenska Українська
*Disclosure: Some of the links above are affiliate links, meaning, at no additional cost to you, Fandom will earn a commission if you click through and make a purchase. Community content is available under CC-BY-SA unless otherwise noted.
Advertisement