Khartag Point is an alcove located along with the coast on the island of Vvardenfell in Morrowind. The area was cherished by the Orsimer of the region and many gathered to honor the Orc that perished at this point.

Khartag Point is a large rock formation on the edge of the West Gash and the Bitter Coast. There is a cove located underneath the area and is only accessible through the Bitter Coast, the cave is well underground and is flooding with water. Several Dreughs and River Trolls inhabit the cave and live off the rummage from nearby shipwrecks. The top area is accessible through the West Gash, behind the Andasreth fortress.

During the Interregnum in 2E 583, the area that would be called Khartag Point was founded by an Orcish captain of the Daggerfall Covenant named Khartag. A year earlier, the Covenant led by General Serien launched a campaign in Morrowind. They besieged the province from as far as Stonefalls at the city of Davon's Watch, to the Isle of Bleakrock near Skyrim. By 2E 583, Khartag had abandoned the Covenant and established a group called the Ropefish. Khartag was approached by the Camonna Tong, a group of gangsters prominent in Vvardenfell, with a deal that made freeing slaves more profitable, and risky for the slaves. Khartag denied this deal and insulted the Camonna Tong; this resulted in the gang raiding Khartag Point and fighting the Ropefish Warriors. An outlander called the Vestige entered the cave and defeated the Camonna Tong as well as the Dreughs inhabiting the cave. Khartag died from a poisoned blade, but the Ropefish lived on and continued to free slaves across the Inner Sea.[1]

In 3E 427, the tale of Khartag would spread across the island; another legend surrounded the area when an Orc was dared to jump off the point. Several Orcish Paupers lived on Khartag Point and had remained to do so amidst the Vvardenfell Crisis. The regional Boethiah statue had sunken into the sea, off the coast of Ashurnibibi. A new statue to Boethiah was built on top of Khartag Point; it was one of the few recorded locations of Goldbrand.[2] 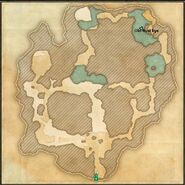 Map of Khartag Point.
Add a photo to this gallery

Retrieved from "https://elderscrolls.fandom.com/wiki/Khartag_Point?oldid=3079602"
*Disclosure: Some of the links above are affiliate links, meaning, at no additional cost to you, Fandom will earn a commission if you click through and make a purchase. Community content is available under CC-BY-SA unless otherwise noted.