Khenarthi's Roost is an island zone that lies off the south coast of Elsweyr. The island is named after the Khajiiti goddess of the winds and sky, Khenarthi.[1]

"This island off the south coast of Elsweyr is named after the Khajiiti goddess of weather and the sky, who is usually represented as a great hawk. She finds many worshipers among the cat-folk's sailors and farmers, especially those who grow moon-sugar cane."
―Loading screen[src]

The lush island of Khenarthi's Roost is a place of calm beaches and tropical forests, and the area is dotted with moon sugar plantations. Native Khajiit fish in the Topal Sea here and tend marshy bamboo farms. Cultists with the power to command the fury of the sea lurk in the island's hidden caves and tide-swept grottoes. The nearby waters are patrolled by Maormer "enforcers" who are known to interrupt trading ships, while enforcing a treaty they made with the Khajiit many years ago.[2][3]

The Kingdom of Pyandonea was outraged by the Aldmeri Dominion's attempt to win over the locals of Khenarthi's Roost, citing an ancient treaty that gives them ownership of the island. Any trading ships carrying cargo in violation of one of the treaty provisions must hand over their cargo to the Maormer or be taken prisoner. Despite the Dominion's attempts to find a peaceful solution, negotiations failed, bringing both sides closer to conflict. By working with the sea-cultists, the Maormer planned to use their command of the sea to expel the Dominion from Khenarthi's Roost.[2][3]

The following are locations accessible in Khenarthi's Roost and, with the exception of unmarked locations, are discoverable on the map. Points of Interest serve as locations with unique side quests, while cities serve as the centralised areas with multiple sublocations and act as a hub for services and merchants. Explanations of the types of locations are provided in the main locations page.

Khenarthi's Roost features a series of zone story quests and unrelated side quests. The zone story quests tie into the Aldmeri Dominion's overarching storyline before continuing to Auridon. Side quests are non-sequential and can be completed in any order, except where one carries on from another.

Six Skyshards can be found in Khenarthi's Roost totalling in two skill points. The zone guide provides clues as to the location of each Skyshard, but many can be found simply by exploring and watching for the distinctive pillar of light they emit.

The two moons as seen from Khenarthi's Roost at night. 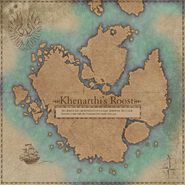 A map of Khenarthi's Roost
Add a photo to this gallery

Retrieved from "https://elderscrolls.fandom.com/wiki/Khenarthi%27s_Roost?oldid=3145447"
*Disclosure: Some of the links above are affiliate links, meaning, at no additional cost to you, Fandom will earn a commission if you click through and make a purchase. Community content is available under CC-BY-SA unless otherwise noted.