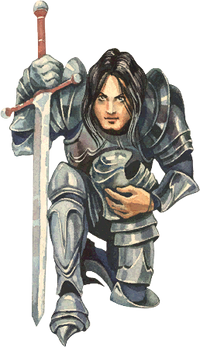 For other uses, see Knight.

"The most noble of all combatants. Strong in body and in character."
―In-game description.[src]

Knights fight for personal glory and honor, usually in service to a lord. They are equally skilled in all three melee combat styles and are capable of shrugging off blows with their heavy armor and blocking ability. Their noble nature endears them to others, even if it is only an illusion.

The Knight is a premade class.

The Knight is a very basic class, with easy tactics, good stat balances and multiple strategies which he can perform.

Melee is a knight's specialty. He has Block to reduce damage from heavy attacks against stronger and more powerful creatures. Depending on the skill level, the knight can use their Block to ensure counterattacks and turn the tables on their enemies, provided they are using a shield. Blunt/Blade are selected for obvious reasons. Whilst the knight has both weapon skills, it's best that they choose one over the other, to ensure the growth of one of their melee abilities. If he should choose Blunt, he'll gain a great advantage in strength, heading with the 'one who hits the most' strategy wins, also he'll gain the advantage of acquiring the most powerful weapons in the game. If they should choose Blade, they'll attain great advantages in speed, balanced attacks, and a variety of long and short blades. However, choosing which blade may be a problem.

Daggers are not a good selection for a knight. Due to their short range and weak priority of damage, the knight will probably end up getting killed first due to his lack of Endurance, and the advantage of speed the dagger permits would be greatly reduced due to the heavy armor the knight wears.

Shortswords aren't recommended, but can still be used. They have better range and damage than a dagger, and still hold similar speed traits. But as before, heavy armor would waste the resource the short-swords give.

Longswords are a much better choice. Average damage, good range, average speed. It's a well balanced weapon for a well balanced class. Yet, it lacks the massive damage a claymore can allow, but in contrast, allows a shield, which is essential for a knight to survive.

Claymores have excellent range, excellent damage, but below average speed. Its range and damage are perfect for those who want to deal with big foes and powerful enemies from a safe distance, but comes with the risk of not being able to wield a shield. Hence weakening the knight.

Heavy Armor is the knight life. Without heavy armor, the knight has to rely on his health, which isn't very high until later levels. The heavy amour ensures the safety of the knight, lowering the risk of dying due to low health. At most, the knight should wear heavy armor during all of his battles, as he has no other safety apart from the potions he buys and finds.

Illusion is a strange choice for a melee class, but can work. If the knight chooses to focus on illusion for quite some time, he may find that it can be a great advantage in combat. Paralyzing spells will allow a load of free hits, time to heal, or a chance to escape. Night-eye can help in dark battles ( although that isn't really necessary ) and help see through murky seas. Light spells can draw enemies to him, and separate them to make combating large groups easier. Fear spells can temporarily disable enemies, ensuring escape, easy killing or free hits or to rally his comrades in battles and provoke the enemy to a frenzy. Finally, the knight can easily persuade people with the help of Illusion and his Personality attribute, as well as Speechcraft

In Conclusion, the knight is for people who favor using the most popular and flashy class of the Warrior side, they specialize heavily in Heavy armour and favor using a blade or Blunt weapon. The knights are fun, easy and safe to use throughout the game.

Retrieved from "https://elderscrolls.fandom.com/wiki/Knight_(Oblivion)?oldid=2788315"
*Disclosure: Some of the links above are affiliate links, meaning, at no additional cost to you, Fandom will earn a commission if you click through and make a purchase. Community content is available under CC-BY-SA unless otherwise noted.