The Companions
The Circle

"Some nights, I dream about the mists of Sovngarde."
―Kodlak Whitemane[src]

Kodlak Whitemane is the Harbinger of the Companions in Whiterun. As Harbinger, he does not give orders, but his word is highly respected in Jorrvaskr and across all nine Holds of Skyrim. Kodlak is also a member of The Circle, though he wishes to be rid of his lycanthropy. Upon death, a werewolf's soul goes to the Daedric Prince Hircine's hunting grounds. Kodlak does not wish for this to be his fate and instead wants his soul to go to Sovngarde, the Nordic afterlife.

If the Companions questline is completed, the Dragonborn becomes Harbinger and cleanses Kodlak of his Lycanthropy. He can later be seen in Sovngarde among the other lost spirits that are trapped in the mist formed by Alduin.

Kodlak was found by the previous Harbinger, Askar, in Hammerfell.[1] Sometime after this, Kodlak succeeded Askar as Harbinger. Kodlak has commanded the Companions for twenty years, balancing his tactical skill, ferocity in combat, and commanding presence. However, those days are drawing to a close. One year before the return of the dragons, Kodlak contracted the rot, despite werewolves having a 100% disease immunity. His condition has reached its final stages of deterioration, making him weak in body. In frustration, he has taken to locking himself behind closed doors and poring over old documents, desperate to cure himself of lycanthropy before the rot ends his life.[2]

Just before the arrival of the Dragonborn, a dream came to Kodlak. As he describes in his journal, he dreamed of Tsun denying the former Harbingers access to Shor's Hall, where honored heroes gather. One by one, their wolf spirit drags them to Hircine, to hunt with him forever. Kodlak helplessly watches as his turn comes and his beast attacks him. However, a stranger arrives to protect him. This person drives back the beast and saves his soul. After seeing the Dragonborn for the first time, Kodlak recognizes them as that person and thus allows the Dragonborn to become a Companion.

Kodlak Whitemane proves to be a benign and wise individual for such a rowdy group. As Harbinger, he is the one that helps channel the Companions' skills in a way that can benefit Skyrim's people, rather than leaving them to brawl and drink all day long. His wisdom is respected throughout the nine holds, as well. When the Dragonborn first meets Kodlak, he is in his twilight years. He has lost his will to win glory in battle, partially because his body cannot allow it. He hints annoyance at this limitation, but he never openly complains.

Kodlak proves to be very wise and perceptive. He could see the Dragonborn's potential instantly, aside from the fact he had seen them in a dream. His awareness is also apparent when he discovers the secret campaign to avenge Skjor. He informs the Dragonborn that the circle of retribution will turn on them and that they have taken more blood than honor demands. Kodlak's foresight is proven correct by the Silver Hand's attack on Jorrvaskr. His observation on honor is very definitive as well; while he grieves at Skjor's loss, he does not condone unnecessary bloodshed, as it is dishonorable. He explains how wrong it can be to react in fury and grief, and he follows this statement. Even with his stern disapproval, Kodlak is not angry with the Dragonborn's actions and gives the Dragonborn a chance for redemption.

Stoic in disposition, Kodlak can be very withdrawn at times. During the storyline, the Dragonborn learns that he is haunted by the thought of joining Hircine in the afterlife. As a true Nord, he wishes to go to Sovngarde, and he persistently devotes his time to trying to find a cure.

As the Dragonborn enters Jorrvaskr, they can ask one of the Companions on how to join. Every one of them will say that they need to speak with Kodlak, the Harbinger. Should the Dragonborn decide to find him, he will first be seen talking with Vilkas about his lycanthropy. If the Dragonborn asks him about joining the Companions, he will immediately accept them, deeming them worthy. Vilkas, however, disagrees and is surprised at Kodlak's decision. Kodlak will then tell Vilkas to spar with the Dragonborn out in the courtyard to test their strength.

In this quest, Kodlak tells the Dragonborn to kill the Glenmoril Witches and take one of their heads, so that Kodlak can cure himself of lycanthropy and get into Sovngarde. While returning to Jorrvaskr after slaying the Glenmoril Witches, the Dragonborn finds out that the Silver Hand attacked the mead hall. Upon entering Jorrvaskr, Kodlak is found dead, and the pieces of Wuuthrad stolen. Vilkas then claims his death will be avenged, and he and the Dragonborn set out to recover the stolen pieces of Wuuthrad.

The Dragonborn must attend Kodlak's funeral at the Skyforge. Afterwards, the Circle's members gather in The Underforge, to discuss on curing Kodlak's spirit of lycanthropy. They set out to Ysgramor's Tomb, where the ritual can be performed. After throwing a Glenmoril Witch Head at the fire in the depths of the tomb, Kodlak's wolf spirit appears. Defeating it will cure Kodlak's lycanthropy, granting him access to the Nordic afterlife, Sovngarde. Kodlak's spirit then briefly reappears to grant the Dragonborn the title of Harbinger of the Companions.

"A stranger comes to our hall."

Where do you stand on the war? "Politics are something best avoided. I prefer more personal confrontations, myself."
Why did you join the Companions? "Like most of our band, I found this family after losing my own. I traveled the length and breadth of this land, learning all I could of the sword and the axe. I was just a boy, but I had the fire of a man in my heart. Eventually, my body caught up to my spirit. My predecessor, Askar, found my in Hammerfell. I was serving as bodyguard for some weak-necked lord out there. He brought me back here, and I realized... that I was actually coming home. I work to bring honor to this family, and to the family that I lost. For my mother, my father, and my grandfather. For all my Shield-Siblings. Family and honor. That's what it means to be one of us, boy."
Who are the Companions? "Your question carries more weight than you may know, newcomer. The sort of thing some of us spend our lives pondering. The difference between a noble band of warriors and a ragged bunch of assassins is as thin as a blade's edge. I try to hold us to the right path."

Vilkas: "But I still hear the call of the blood."
Kodlak: "We all do. It is our burden to bear. But we can overcome."
Vilkas: "You have my brother and I, obviously. But I don't know if the rest will go along quite so easily."
Kodlak: "Leave that to me."

Vilkas: "Master, you're not truly considering accepting him?"
Kodlak: "I am nobody's master, Vilkas. And last I checked, we had some empty beds in Jorrvaskr for those with a fire burning in their hearts."
Vilkas: "Apologies. But perhaps this isn't the time. I've never even heard of this outsider."
Kodlak: "Sometimes the famous come to us. Sometimes men and women come to us to seek their fame. It makes no difference. What matters is their heart."
Vilkas: "And their arm."
[After speaking to Kodlak]
Kodlak: "Vilkas, take him out to the yard and see what he can do."
Vilkas: "Aye."

Kodlak: "Brothers and sisters of the Circle, today we welcome a new soul into our mortal fold. This man has endured, has challenged, and has shown his valor. Who will speak for him?"
Farkas: "I stand witness to the courage of the soul before us."
Kodlak: "Would you raise your shield in his defense?"
Farkas: "I would stand at his back, that the world might never overtake us."
Kodlak: "And would you raise your sword in his honor?"
Farkas: "It stands ready to meet the blood of his foes."
Kodlak: "And would you raise a mug in his name?"
Farkas: "I would lead the song of triumph as our mead hall reveled in his stories."
Kodlak: "Then the judgement of this Circle is complete. His heart beats with fury and courage that have united the Companions since the days of the distant green summers. Let it beat with ours, that the mountains may echo and our enemies may tremble at the call."
Aela: "It shall be so."
Skjor: "It shall be so."
Vilkas: "It shall be so."

Kodlak: "Tradition is very important to me, son."
Skjor: "To me as well. I think we don't see the same tradition at play here."
Kodlak: "If you want to lead this pack when I'm gone, you have to see farther. Look closer."
Skjor: "Well which is it? Look farther or closer?"
Kodlak: "Come on now, boy, you know what I meant..."
Skjor: "You speak in riddles sometimes."
Kodlak: "I don't mean to confuse you."
Skjor: "It's not confusing... just frustrating."
Kodlak: "You're a strong warrior, Skjor. Your heart is fiery and that serves you well in battle."
Skjor: "Thank you, Harbinger."
Kodlak: "But even the bravest of men consider their actions. I want you to survive long enough to take the mantle."
Skjor: "Don't worry about me."

Aela: "You wanted to see me?"
Kodlak: "I worry that you've been spending too many nights out."
Aela: "Where I go is my business. If you have a concern about my honor, bring it before the Circle."
Kodlak: "You forget yourself, young one."
Aela: "I'm sorry. I didn't mean to snap. Just... these hunters. We're all on edge."
Kodlak: "That's why it's best to not mistake foolhardiness for bravery."

Kodlak: "How goes the hunt?"
Aela: "Skjor's heard rumors of a bear the size of a mammoth in Hammerfell. We're going to seek it out."
Kodlak: "What glorious prey. Come back alive, and with stories to tell!"
Aela: "Always."

Kodlak: "How are the young ones coming along?"
Farkas: "Some are too happy to fight. Blood runs hot."
Kodlak: "I remember when you were the same way. The more they train, the more they'll cool down."
Farkas: "I hope so."
Kodlak: "Just have them focus on the calm in the battle. Control the rage, don't let it control you."

Farkas: "What weapon do you like, Harbinger?"
Kodlak: "When I was young, I favored huge swords, much like you. Hard to lift these days, but I still enjoy the heft of a good hammer."
Farkas: "Big swords should always beat little swords."
Kodlak: "Brave hearts beat lesser ones. That's the decider."

Torvar: "Master, I..."
Kodlak: "My title is Harbinger, child. I am no man's master."
Torvar: "Forgive me. You're just the one in charge, and it's what I'm used to."
Kodlak: "No one is in charge here. Each Shield-Brother is his own man, each Shield-Sister her own woman."
Torvar: "Well why do I have to listen to Skjor, then?"
Kodlak: "Skjor has been a warrior for a long time. You would be wise to listen to him. Any warrior that gets to be old is either fearsome or a coward. I'll let you find out which Skjor is."

Torvar: "Do you think I could be a member of the Circle? Some day? If I work hard?"
Kodlak: "Don't worry about such things. Just focus on your own honor. Bring glory to the Companions, and that glory will return upon you."
Torvar: "I just want to make sure I'm moving up."
Kodlak: "This isn't the military, son. There are no ranks."
Torvar: "But aren't the Circle in charge? And don't you lead them?"
Kodlak: "I guide the Companions. The Circle advises me. But we are all free warriors. Only our honor binds us together." 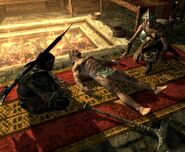 Kodlak's funeral
Add a photo to this gallery