Not to be confused with Warchief Kurog.

"I am Kurog, king of the Orsimer. We will rebuild Orsinium, make it stronger. Whoever dares oppose the uniting clans will feel my wrath. Welcome to my war."
―King Kurog[1]

King Kurog gro-Orsinium,[2] also known as Chief Kurog gro-Bagrakh,[3] is the Orcish King of Orsinium. Parts of Wrothgar are under the control of King Kurog, who emphasizes that the Orcs of Orsinium worship Trinimac instead of Malacath, out of the belief that the ways of Malacath are outdated, and that reinstating Trinimac as the Orcish deity is the path to unity and progression. Kurog is a member of the Daggerfall Covenant and represents the Orcs. However, his duties to uniting the Orcish clans and rebuilding Orsinium keep him occupied from the politics of the Three Banners War.[4] He serves as the hidden main antagonist of The Elder Scrolls Online: Orsinium.

Forge-Mother Alga will send you to assist King Kurog in attacking Frostbreak Fortress and defeating the Winterborn. Kurog will be found inside a tent with his shield-wives, saying "I want all the soldiers from all the clans to circle the fort. Ice-Heart won't escape me this time." After speaking to him, he will become your follower. When entering Ice-Heart's Lair, he and the Winterborn warlord will have the following conversation:

Urfon Ice-Heart: '"So the king of the pig children has come to die. Your soldiers failed, Kurog. And so will you.
King Kurog: "Hahahaha! I love it when my enemies mock me, helps me work up a good rage."
Urfon Ice-Heart: "You treat everything like a joke! That's why the Orcs refuse to follow you. You mock the fallen and dishonor their sacrifices!"
King Kurog: "Dishonor? Ha! I'll honor them, by separating your head, from your body!"

Once Urfon Ice-Heart is killed, Kurog will comment "How do you like that, you cold bastard?". He will then take his sword and say "Ice-Heart's blade is mine! Now maybe the clans will accept my rule." After speaking to him, he will request you go to Scarp Keep.

Kurog will be at The King's Cornerclub, and will want to speak with you. After talking to him for some time, his mother and shield-wives will show up, notifying you both about an emergency:

King Kurog: "Damn it, you two always show up and ruin my fun!"
Shield-Wife Razbela: "Oh, I have not even begun to ruin your fun, my king. But let's leave the pleasantries for later. We have an urgent situation to report."
King Kurog: "I can never tell when you're joking. Fine. What's so important?"
Shield-Wife Oshgana: "The Trinimac temple has been attacked, my beloved. Malacath devotees have barricaded the doors and taken the priests as hostages."
King Kurog: "These fanatics dare to attack my city? My people‽ I'll deal with them personally!"
Forge-Mother Alga: "You will do no such thing, my son. After what happened in the throne room, this is undoubtedly a trap."
King Kurog: "I won't sit by while they attack my city!"
Forge-Mother Alga: "This problem requires a personal solution, and I have a perfect idea. Outsider, let us talk."

You are then tasked with investigating the attack on the Temple of Ire, rescuing the hostages, killing the Malacath extremists.

In the Name of the KingEdit

Get the clan chiefs to attend Kurog's moot.

The Anger of a KingEdit

Kurog can be found at the bottom floor of Scarp Keep, looking at a statue of Baloth Bloodtusk. He believes that Eveli Sharp-Arrow has betrayed him, and wants you to find her.

Before the Moot, you must speak to Kurog regarding the Vosh Rakh infiltration of Orsinium's forces. Kurog will deny the allegations, claiming it is propaganda spread to you by Chief Bazrag, and asks you to meet him in the Dining Hall. There, you find Forge-Mother Alga, and after speaking to her, the following conversation will occur:

Forge-Mother Alga: "Let it be known, the outsider who stands before us has betrayed our great city!
For your actions, I condemn you and your allies to death.
A sentence you shall execute by your own hand.
May Trinimac guide your blade."
King Kurog: "I'm sorry it had to come to this. But what I do I do for the good of the Orsimer people."

Kurog will enter the room shortly before you black out.

Blood on a King's HandsEdit

Kurog and Alga will be at the moot, giving a speech to the clan chiefs:

King Kurog: "Silence, chiefs! Your constant bickering has plagued our people for long enough!
You isolate yourselves in your own strongholds, perpetuating our selfish nature. We must change who and what we are!
I tried to appeal to you as equals, but you refused to listen. I grow tired of arguing with you."
Forge-Mother Alga: "The king cares for our people and all you do is break his heart."
King Kurog: "The choice is simple. Kneel before me as your king and ruler of the united Orsimer nation―or die!"
Chief Bazrag: "We need to move faster. Kurog's about to start slaughtering the chiefs!
Once we get inside, find Kurog and take him down. We need to save as many chiefs as we can.
There's still time if we move fast. We need to open this gate."
Eveli Sharp-Arrow: "There's no lever. They must have shut it from the other side."
Chief Bazrag: "Stand aside and let me work! Get ready to pull those people out of there!"
King Kurog: "You leave me no choice. I'll unite the clans over your dead bodies!"
Forge-Mother Alga: "But don't worry. Trinimac is waiting for you on the other side."
King Kurog: 'Archers, eliminate the clan chiefs!"
Chief Ramash: "We've been betrayed! Defend yourselves!"
King Kurog: "And now the last guest has arrived. I'm going to make you pay for your disloyalty."
Chief Bazrag: "Clan chiefs, over here! Arrgh! Hurry, this gate is... heavier than it looks."
Eveli-Sharp Arrow: "I'll go back and help Chief Bazrag. Don't get yourself killed without me!"
King Kurog: "As impressive as always, but it doesn't matter. My soldiers are already moving to block the tunnels.
But even impressive criminals must pay for their crimes. I'm going to deal with you―personally!
Bow before the king of the Orsimer!"

They betray the chiefs and have their archers fire at them. Bazrag and Eveli will help open the gate and lead the clan chiefs to safety, while you don the task of defeating Kurog and his mother.

Kurog was born to Forge-Mother Alga (then Forge-Wife) of Clan Bagrakh sometime around 2E 541.[UL 1] As a child, Kurog grew up in an Orcish clan in Wrothgar, and was unsatisfied with his life. He had ambitions to explore the world and prove himself in battle.[2]

He rallied his companions Bumnog, Bizra, and then friend Bazrag "the Butcher" gro-Fharun and joined the Gaspard's Stalkers mercenary company, led by the infamous Gaspard Esmery. After winning skirmishes in Hammerfell and Cyrodiil, the company made its way to Elsweyr. Kurog went to a tavern in the city of Orcrest and met with a Breton woman named Zephrine Frey. He had spoken to her about his past, and said that he would return to his clan and replace his chief by killing him, then taking command of his clan.[2]

Kurog and his companions later resigned from Gaspard's Stalkers, and were journeying to Wrothgar. He agreed to meet with Zephrine Frey and had visited Wayrest on his way to Wrothgar. She gave him a tour of Wayrest and its' Breton cuisine, and then had him meet with King Emeric in Wayrest Castle. Frey described them to have gotten along smashingly, as they found to have shared similar opinions on politics and warfare, and took great pleasure in making each other laugh. At the end of the evening, Kurog admitted he was returning to Wrothgar to take control of his clan, but decided he would try and rebuild Yashnag Gro-Yazgu's kingdom in Falkreath before turning to High Rock. Kurog and Emeric then shook hands, and the latter suggested that Kurog take Zephrine Frey with him to Wrothgar. Kurog, admitting to Emeric that he knew Frey was a spy, agreed anyways as he found her amusing.[2]

During the trip to Wrothgar, Kurog spoke about his dream to have the Orcish people change their oppressive and restrictive traditions, build large cosmopolitan cities of learning, and introduce new cuisine. Soon after crossing the border into Wrothgar, Kurog entered his childhood stronghold, where Chief Bolazgar was waiting for him with four honor guards. Bolazgar asked Kurog if he'd come to grovel and beg for his forgiveness. Kurog instead said he'd come to challenge the chief for his leadership of Clan Bagrakh. Bolazgar, shaking with rage, questioned Kurog if he truly believed he could beat him in fair combat. Kurog taunted the chief saying that he'd grown fat in weak in his time away, and that he'd instead been fighting wars in distant lands. Enraged by Kurog's remarks, Bolazgar charged at him with a scream of pure rage. Kurog stood his ground and calmly unsheathed his sword, and countered Bolazgar's clumsy attack with a block, and than decapitated Bolazgar, killing him, and therefore making Kurog the new chief of the clan. Each member dropped to their knees and yelled "Long live Chief Kurog!," to which Kurog proclaimed "Today begins a new day for the Orsimer! I will lead you to glory! On this, you have my word!"[2]

Kurog spent a few years consolidating his power, growing his clan, marrying wives, and forming alliances with clan chiefs that supported his ideas. To secure her son's success and future, his mother Alga became Grand Forge-Mother, and became an advisor and negotiator for her son. For his hunt-wife, Kurog and Alga turned to Shatul Clan, known for their prized skills in hunting, and Kurog married Hunt-Wife Noroga. For his Forge-Wife, the obvious choice was Ashaka from the prized smiths of Morkul Clan, but Alga was more interested in Tugha. Tugha had studied abroad with the smiths of western Skyrim for two years, with her experience, modern attitudes, and intelligence winning her the place of Kurog's Forge-Wife. Kurog married had many other wives who worked behind the scenes handling a number of different matters, such as his Immigration-Wife Uulitag.[2][5]

Alliance with the Daggerfall CovenantEdit

He soon turned his resources to Falkreath Hold of Western Skyrim, hoping to rebuild a great city that could rival Wayrest on the site of Yashnag gro-Yazgu's stronghold. In 2E 566, despite the Nords' civil war and Schism years prior, they still proved to be resistant fighters, forcing Kurog to be stationed outside Dragonstar of Craglorn with his troops. King Emeric was fighting in King Ranser's War, and sent Zephrine Frey as an emissary to meet with Kurog. She asked of Kurog's assistance in the war, and while Kurog was willing to participate, he required a number of demands before he could declare war on King Ranser. Emeric agreed to the terms, granting Kurog de jure control of Wrothgar, supporting construction of Orsinium, agreeing to prohibit Breton or Redguard armies enter the region due to the prior Sieges, and be recognized as an equal in the Covenant. Kurog and his troops were responsible for setting Shornhelm ablaze when King Ranser returned, proving to be a key and final part in defeating him. Ranser then retreated to Traitor's Tor, and met his last stand under Kurog's troops.[3][6] 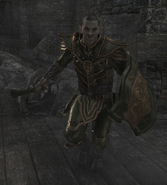 An identical actor of Kurog, prior to the release of Orsinium.
Add a photo to this gallery

Notice: The following are unlicensed references. They are not copyrighted by a ZeniMax Media company, but can still be considered part of The Elder Scrolls lore and are included for completeness.
Retrieved from "https://elderscrolls.fandom.com/wiki/Kurog_gro-Bagrakh?oldid=2981259"
*Disclosure: Some of the links above are affiliate links, meaning, at no additional cost to you, Fandom will earn a commission if you click through and make a purchase. Community content is available under CC-BY-SA unless otherwise noted.