Kynareth, called Kyne by the Nords and Kin by the Kothringi,[UL 1] is a goddess of the Nine Divines. She is the strongest of the Sky spirits and is the deity of the heavens, the winds, the elements, and the unseen spirits of the air. Patron of sailors and travelers, Kynareth is invoked for auspicious stars at birth and for good fortune in daily life. In some legends, she is the first to agree to Lorkhan's plan to invent the mortal plane, and provides the space for its creation in the void. She is also associated with rain, a phenomenon said not to occur before the removal of Lorkhan's divine spark. Kynareth is generally seen as the embodiment of nature, with the mysterious and deadly Spriggans representing her wrath.[source?]

"Come to me, Kynareth, for without you, I might not know the mysteries of the world, and so blind and in terror, I might consume and profane the abundance of your beautiful treasures."[1] 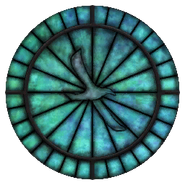 A shrine to Kynareth found in The Elder Scrolls II: Daggerfall

Kynareth, painted on a wall in The Elder Scrolls: Legends
Add a photo to this gallery

Notice: The following are unlicensed references. They are not copyrighted by a ZeniMax Media company, but can still be considered part of The Elder Scrolls lore and are included for completeness.
Retrieved from "https://elderscrolls.fandom.com/wiki/Kynareth?oldid=2905346"
*Disclosure: Some of the links above are affiliate links, meaning, at no additional cost to you, Fandom will earn a commission if you click through and make a purchase. Community content is available under CC-BY-SA unless otherwise noted.