Defined by player, Nord by default

Defined by player, male by default

Defined by player, blue by default

Defined by player, blond by default

Laat-Dovah-Kiin, "Last-Dragon-Born"),[note 1] generally referred to as the Dragonborn (Dragon Language:

Dovah-Kiin, "Dragon-Born"),[note 1] is the player's character and the protagonist of The Elder Scrolls V: Skyrim and its expansions, Dawnguard, Hearthfire, and Dragonborn.

"In their tongue he is Dovahkiin, Dragonborn."
―Esbern in the Skyrim trailer

In Dragon language, "Dovahkiin" is a combination of the words "Dovah," meaning "dragon," and "kiin," meaning "born," or "child" which is typically translated to "Dragonborn," but it can also be translated to "Dragonchild." Dovahkiin also has a second meaning: the "Dov" in "Dovah" refers to Dragonkind as a whole, while the "ah" means "hunter." Interpreted thus, the name reads "Dragonkind Hunter Born," or "Born Hunter of Dragonkind," an appropriate description of what the Dragonborn is destined to do.

Something of further interest is that dragons use the term Dovahkiin as a proper noun to address or talk about the Dragonborn and the dragon naming convention holds that names consist of three words. When called upon by the Greybeards after killing Mirmulnir, Dov-Ah-Kiin is stressed as three separate words. This could signal that the real translation of "Dov-ah-kiin" is "Born Hunter of Dragonkind," when the traditional naming convention of dragons is held.

"Skyrim legend tells of a hero known as the Dragonborn, a warrior with the body of a mortal and soul of a dragon, whose destiny it is to destroy the evil dragon Alduin."
―Loading Screen[src]

The appearance of the Last Dragonborn was prophesied upon Alduin's Wall, a large edifice found within Sky Haven Temple. It depicts several events that would preface the return of the Nordic god of destruction, Alduin. The prophecy itself is dire, but scholars believed that its omens had been fulfilled and that a single individual, gifted with the same powers of the Thu'um held by the dragons themselves, may rise to fight against Alduin and assure Nirn's survival.[4] Alduin finally returned in 4E 201, during the midst of Skyrim's civil war. Raising an army of dragons from the dead, he attempted to resume his path of destruction. However, he was eventually defeated in a battle by the Last Dragonborn and three ancient Nordic heroes in Sovngarde.

"Hero of the Nords I name you, Dragonborn, let none deny it."
―Galmar Stone-Fist[src]

Much like previous Dragonborn individuals who existed throughout history, such as Reman Cyrodiil, Tiber Septim and Miraak, the Last Dragonborn has the ability to consume a slain dragon's soul and absorb its knowledge and power, allowing them to learn words of power almost instantaneously,[5] though reportedly neither Reman nor Tiber have ever killed a dragon and absorbed its soul. It is said that the Blades have always guided, protected, and served the Dragonborn, whom they consider "The Ultimate Dragon Slayer."[6]

At the beginning of Skyrim, 7 AM of the 17th of Last Seed 4E 201, the Dragonborn is a prisoner, who had been captured by members of the Imperial Legion after crossing the border from Cyrodiil. While being transported to the settlement of Helgen, the Dragonborn discovers that Ulfric Stormcloak, the leader of the Stormcloak Rebellion, is a fellow prisoner. Upon reaching Helgen, the local Imperial Captain sentences all the prisoners to death. Seconds before the Dragonborn's execution, Alduin attacks, providing a chance for escape. Regardless of race, the Dragonborn starts with both flames and healing spells, indicating that they studied the arcane arts before traveling to Skyrim.

During the events of the quest "No One Escapes Cidhna Mine," the Dragonborn can choose to remark on whether they have a family or not. When talking with Serana, the Dragonborn may comment on what type of relationship the Dragonborn had with their parents as well as hinting at their fate. Additionally, Eola may claim that they may have tasted the flesh of a dead sibling when they were young, during the quest "The Taste of Death."

When formally greeting the Last Dragonborn, the Greybeards name them "Ysmir," Dragon of the North. The same title was held by Tiber Septim, Wulfharth, and supposedly all Dragonborns before that have visited the Greybeards.

Skyrim's trailers and concept art depict the Dragonborn as a male Nord with brownish blonde hair and light blue eyes. He wears a studded cuirass, an iron helmet, iron gauntlets, and iron boots. In one trailer, the Dragonborn uses a steel sword and a banded iron shield, while in a screenshot he dual wields a steel sword and a steel dagger. In Skyrim, as with all Elder Scrolls games, race, gender, appearance, and equipment are left to the player's discretion. 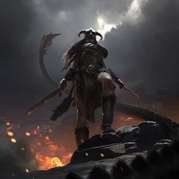 The Young Dragonborn in The Elder Scrolls: Legends

Беларуская Deutsch Español Suomi Français Bahasa Indonesia Italiano 日本語 Nederlands Norsk Polski Português Русский ไทย Українська
*Disclosure: Some of the links above are affiliate links, meaning, at no additional cost to you, Fandom will earn a commission if you click through and make a purchase. Community content is available under CC-BY-SA unless otherwise noted.
Advertisement