Affairs of a Wizard

Leafrot Cave is a cave inhabited by Celedaen, a Necromancer. The cave is located just north of the end of Panther River's northwest branch, or directly north of Fort Redwater and south of Fort Cuptor on Lake Canulus.

Inside this two leveled cave are a few chests with minor loot. When one enters level two one can find Celedaen's notes The Path of Transcendence on a table to the left. Further in there are three alcoves that looks like worship spaces with coffins and skeletal remains.

The Hero is to kill a powerful necromancer named Celedaen, who is attempting to transform himself into a lich. The orders recommend that the Hero attempts to discover a weakness before taking him on. 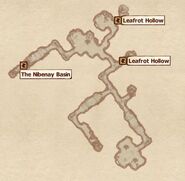 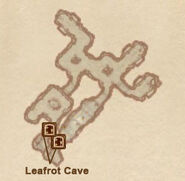 One of three worship alcoves
Add a photo to this gallery

Retrieved from "https://elderscrolls.fandom.com/wiki/Leafrot_Cave?oldid=2777455"
Community content is available under CC-BY-SA unless otherwise noted.